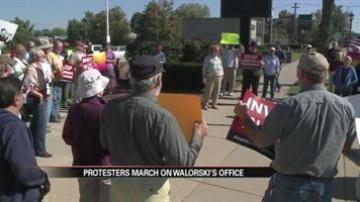 MISHAWAKA, Ind. -- It's been 11 days since the Government shutdown -- with no immediate end in sight. Many fear the nation could experience another economic downturn if Congress doesn't raise the debt ceiling. Dozens are protesting outside Congresswoman Jackie Walorski's office to encourage her to work with political leaders to reach a deal.

The demand is simple. The politics aren't.

"She needs to listen to her voters," Jeremy Bernstein, a community organizer with Americans for Democratic Action," said.

He's one of many that feel the nation is headed down the wrong path.

"Congress needs to work together," Bernstein said. "Put the political differences apart, and the government back and running."

The nation is approaching week three of the government shutdown.

In Michiana, many federal programs have been cut or closed. For people who rely on these programs to survive, it's hard to make sense of it all.

"A member of the suicide caucus," Charles Mumaw, a concerned citizen from Goshen, said.

Suicide for a government to refuse to fund itself, but Mumaw thinks there's still hope.

"In the broad stroke of history, this is a bump in the road. Never give up hope in America."

He and others hope protests like these encourage folks to reach out to their Congressional leaders, and encourage them to get something done.

"Congresswoman Walorski is currently in Washington. She remains dedicated to working with Members on both sides of the aisle to find common sense solutions to end this disappointing government shutdown. Since October 1st, Congresswoman Walorski voted thirteen times to fund essential programs for Hoosier families, and nearly all of these measures remain on hold in the Senate. Moving forward, she remains focused on addressing our nation's budget issues and sending people back to work. The Mishawaka and D.C. offices remain open during regular business hours to field questions and assist constituents."