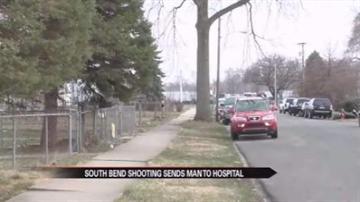 SOUTH BEND, Ind. --  South Bend neighbors are scared for their kids' safety after a drive by shooting Sunday morning around 3 a.m.

"She was feeding her grandson and she heard some shot outside," said Yulisa Gil.

Lourdes Gil and her daughter Yulisa Gil were frightened when they heard gunshots outside their home on South Albert Street in South Bend.

Neighbors told police a black Chevy truck drove up and started shooting out his window.

One man was hit in the leg with a bullet and had to be rushed to Memorial Hospital.

"She saw policeman and firetrucks and ambulances," said Gil.

Gil says she has heard of violence on the west side of town before but never so close to home.

"It was not on our street but it was close by on other streets," said Gil.

Now Gil says she is nervous for her families' safety.

"She gets scared that they are going to do something to us," said Gil.

Although there is a police presence patrolling the west side near Gils' home, she is not sure how to protect her family from this gun violence.

"We haven't really seen stuff like this ..so we don't really know what to do," said Gil.

For now Gil is making sure she keeps an even closer eye on her kids.

"With this she is not going to let us go outside without supervision because she is scared something is going to happen," said Gil.