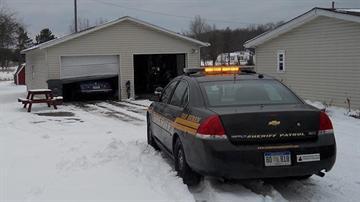 VAN BUREN COUNTY, Mich. – A Paw Paw man suspected of stealing gas from a Speedway gas station led law enforcement on a chase that ended when the suspect drove into an unattached garage at a private residence.

Around noon, Van Buren central dispatch received a call from the Speedway gas station on Kalamazoo Street in Paw Paw. The worker reported a man driving a blue Buick Riviera was getting gas and had left without paying within the past week.

A deputy was nearby and attempted to conduct a traffic stop on the vehicle.

The suspect drove through a car dealership and then drove eastbound on St Joseph and southbound on County Road 653.

The driver then turned eastbound onto 56th Avenue reaching speeds of up to 80 miles per hour.

The suspect then turned south onto 30th Street and continued onto 58th Avenue.

Just prior to reaching the intersection with CR657, the 56-year-old man drove through the yard of a private residence and into the closed door of a 2 car detached garage.

The man attempted to flee, but was apprehended by deputies after a brief struggle, according to reports.

The garage door and door frame was badly damaged. The garage was empty at the time of the crash.

Deputies believe the suspect might possibly have been under the influence of a controlled substance.

He was taken into custody and taken to the Van Buren County Jail pending arraignment.