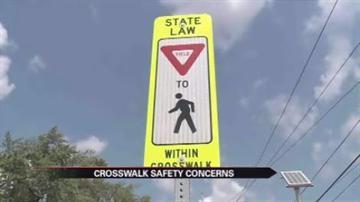 MISHAWAKA, Ind. -- Last November, ABC57 looked into a dangerous pedestrian crosswalk at Logan and Wilson streets in Mishawaka, near the River Walk. Is the intersection still a problem for pedestrians?

"It's a pedestrian crosswalk. They need to slow down and actually yield the right of way to that pedestrian so they can cross the street," said Lieutenant Tim Williams of the Mishawaka Police Department.

At the intersection, the person wanting to cross the street hits a button and lights flash. That is supposed to signal cars to yield to pedestrians.

In November, ABC57 was first to tell you it appeared cars weren't stopping like they were supposed to.

A viewer wanted ABC57 to take another look at the Logan crosswalk.

So we sat along Logan Street for an hour to see what happened.

A cyclist hit the button and several cars continued to go by as the lights flashed.

The same thing happened to the next person on foot and two others on bicycles.

The fifth person to cross didn't press the button and crossed the street.

By then the hour had passed.

Pritchard decided to try it for herself. She hit the button and several cars went by even though the lights were flashing.

Finally one car did stop and she could cross the street.

With school just around the corner, officers say it is very important to slow down.

"We want drivers to cool your engines. Want you to slow down and be prepared for the pedestrians that are going to be out there and Mishawaka is a predominantly walking school district so we're going to have a lot of children walking to school," said Williams.