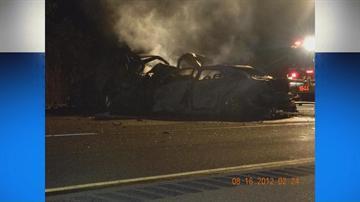 LA PORTE COUNTY, Ind. -- Police believe a Michigan man killed his own family hours before he died in a La Porte County crash.

According to the Indiana State Police Michael Vanderlinden, 33, and Juan Nelson, 45, were killed after their cars collided at head on at around 1:35 Thursday morning outside of Michigan City on I-94.  Investigators believe Vanderlinden was driving the wrong way in the westbound lanes.  Both cars were engulfed in flames and both drivers died at the scene.

When police officers went to notify Vanderlinden's family of his death at his home in Van Buren Township just north of Detroit nobody answered the door.

"We checked with neighbors and neighbors told us it was very unlikely, that there should be somebody home because it's a stay at home mom and the kids are home from school," explained Capt. Greg Laurain of the Van Buren Township Police Department.  "Further investigation revealed that the front door was unlocked, we went in and at that point found three bodies that of the mother and her children."

Police found Linda Vanderlinden, 34, and her two sons Matthew, 4, and Julian, 7, stabbed to death in their bedrooms.  Investigators found no evidence of a break-in and said police had only ever been called to the Vanderlinden home for an animal complaint recently.  Neighbors said the last time Michael Vanderlinden had been seen was around 9:30 p.m. on Wednesday.

"Never been trouble, maybe some psychological problems with him, but that's about it," said neighbor John Jones about the Vanderlindens.  "It's terrible."

Van Buren Township Police are working with Indiana State Police to gather evidence from the remains of Vanderlinden's car.  Detectives don't know where Vanderlinden was headed when he was killed on I-94.