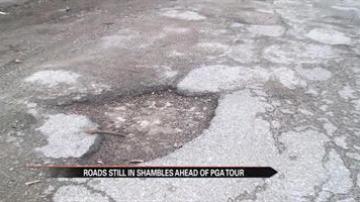 BENTON HARBOR, Mich. -- Drivers in Benton Harbor say potholes and sink holes are swallowing up the roads. One driver found a deep crater the hard way.

In a little over a month, Harbor Shores in Benton Harbor will be hosting the Senior PGA Tour.

Roads leading from St. Joseph to the golf course in Benton Harbor are smooth, but roads in the heart of the city - where people live - have to be driven very carefully because of potholes.

Kea Bennett lives on Catalpa Avenue and says the pothole in front of her house keeps getting bigger.

"It just started getting like bigger and bigger," said Bennett.

Over the weekend, things got serious.

"A car was coming down the street and next thing you know the whole front of the car just went in to the sink hole," said Bennett.

Bennet took pictures while the driver waited for help

"I knew it was going to happen! I just knew it," said Bennett.

Bennett says it's nice the city is getting a minor facelift for the Senior PGA Tour, but as a resident, she's not feeling the improvements.

"They're not doing nothing for this part of the city and they need to," said Bennett.

The city is expecting some funds to come in to go towards improving roads.