Drivers line up for cheaper gas 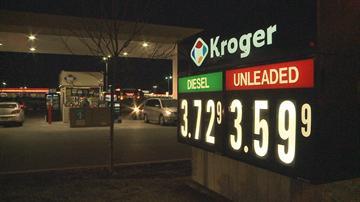 MISHAWAKA, Ind. – Dozens of cars jammed into the parking lot of the Kroger Gas Station on McKinley Avenue on Monday afternoon to try and fuel up with prices at $3.59-a-gallon for regular unleaded gasoline.

"Yeah, they haven't gone up yet, they went up to $3.89 down the street already,” said Mary Todd as she sat in line in her car.  “I thought I'd get in here and save 20-cents at least and with the points from Krogers it's even 10 more cents a gallon.”

At most other stations prices were hovering around $3.85 after a single-day spike in prices of around 20-cents.  A lot of the drivers making their way through the long lines at Kroger said they couldn’t believe they were waiting in line to get $3.59-a-gallon gas when months ago they would have been trying to avoid that price.

“I think it was last month we were out here waiting for, I think it was $3.29 then,” recalled Jahala Naumovski.  “It’s worse now than last time.”

Naumovski and other drivers said they were just thankful they could still afford the higher prices.

“I can just imagine how it's going to be for people who don't work that have vehicles that are trying to find jobs,” she explained.  “I normally fill up for $60 every two-weeks, now I'm probably going to be filling up for $60 a week."

Experts believe the reason for the price jump could be tension in the Middle East between Iran and Israel.  Another explanation may be the shut-down of some U.S. oil refineries.