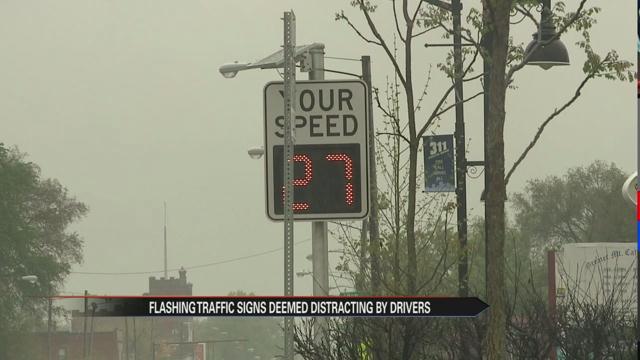 New speed radars are causing concern for some South Bend drivers. The city recently installed them along Lincolnway West in an attempt to get drivers to slow down.

These radars are similar to other speed sensors around the state. The key difference though, is a small blinking light.

Monterrosa is one of many drivers to notice the new speed radars.

He says, while he supports the city's efforts to keep the roads safe, the strobe light indicator in the sensors could do more harm than good.

“I'm concerned that people may be distracted and not pay attention to what's going on on the road,” said Monterrosa.

The city says these radars were installed to keep drivers focused on slowing down.

“Part of our work involves roadway improvements and one of the ways to do that is to improve the safety along Lincolnway, so that's why we installed them.” said Corbitt Kerr, South Bend's City Engineer.

These speed radars are a part of the city's Smart Streets campaign, a plan to revitalize the area.

City officials say they does recognize some issues drivers may face.

“The speed indicator at this point in time can seem a bit confusing, not direct to that individual driver,” said Kerr.

The city is working on ways to fix these problems.

“We are doing a road diet so we are converting the number of lanes from four lanes to three with the third lane being a center turn lane,” said Kerr.

The revitalization plan is to make the area more accommodating to cyclists, transit riders and walkers.

The city also adds, that at this time, there are no plans to take photos of drivers speeding in the area.