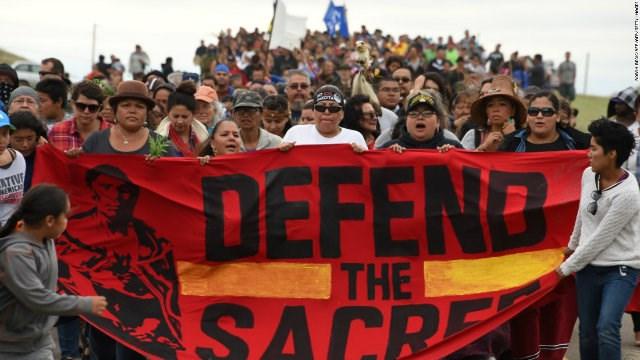 (CNN) -- Demonstrations against construction of the Dakota Access Pipeline ramped up over the weekend, resulting in dozens of arrests and a highway closure, authorities in North Dakota said.

Eighty-three were arrested and charged with criminal trespass and engaging in a riot. The protesters "engaged in escalated unlawful tactics and behavior," such as using bicycle locks and makeshift handcuffs to attach themselves to construction equipment and vehicles, the department said. Some cut holes in doors and put their arms through them covered in concrete casts, fusing their arms to the door.

The demonstrations continued Sunday, leading to the closure of Highway 1806 in both directions as hundreds of people blocked the road, sheriff's spokeswoman Donnell Preskey said. The highway later reopened after protesters removed a blockade, officials said.

"There are a few hundred protesters who have set up teepees and other things in the area," Preskey said. "It's not calm at all."

What each side wants

The arrests are the latest in a monthslong standoff between opponents of the pipeline and law enforcement. About 20 protesters, including "Divergent" actress Shailene Woodley, were arrested October 10 in the same area. Other prominent figures arrested at pipeline protests include "Democracy Now!" host Amy Goodman and Green Party presidential candidate Jill Stein.

The 1,172-mile pipeline would stretch from the oil-rich Bakken Formation -- a vast underground deposit where Montana and North Dakota meet Canada -- southeast into South Dakota, Iowa and Illinois.

After the pipeline is completed, it would shuttle 470,000 barrels of crude oil a day, according to the developer, Energy Access Partners. From Illinois, the oil could go to markets and refineries across the Midwest, East Coast and Gulf Coast.

Protesters say the pipeline will damage the environment and affect historically significant Native American tribal lands. The Standing Rock Sioux tribe, whose reservation in North Dakota is near the pipeline route, and other tribes oppose the project.

Demonstrations began to grow in size in late summer, becoming more consistent. The standoffs between law enforcement and demonstrators have led to allegations from both sides that the other is using increasingly aggressive tactics to make their point.

'This protest is not peaceful or lawful'

Saturday's arrests were the latest examples of an escalating pattern of abuse of power on the part of law enforcement, Standing Rock Chairman Paul Archambault said.

"The intimidation by militarized police in riot gear and unlawful arrests are an attack on the First Amendment rights of the protectors, and we again ask the Department of Justice to send observers to the area to ensure that constitutional rights are protected."

"Police are also routinely strip searching protesters, even when they have only been charged with a misdemeanor offense. Like days of old, this is a thinly veiled attempt to dehumanize and degrade Native people. Thousands of people have come to Standing Rock in prayerful protest of the pipeline and millions more support the Tribe in our efforts to protect our sacred places and water."

"Today's situation clearly illustrates what we have been saying for weeks: that this protest is not peaceful or lawful," he said. "This protest was intentionally coordinated and planned by agitators with the specific intent to engage in illegal activities."

Demonstrations continued on Sunday, leading to the closure of Highway 1806. Hundreds of people gathered on the road, blocking it with rocks, hay bales and other items, making it unsafe for law enforcement to reopen the highway, said Preskey of the sheriff's department.

Protesters removed the blockade once officials told them "the liability they would incur should an emergency take place within the camp," authorities said.

At least one person was arrested for trespassing as the situation escalated, Preskey said.

Law enforcement shot a drone in the same area after it flew at a law enforcement helicopter "in a threatening manner," Kirchmeier said.

The helicopter was assisting surveillance of protests near Highway 1806. A sheriff on board said "the drone came after us," making the pilot and passengers fear for their lives.

The drone was flying directly above officers in violation of Federal Aviation Administration rules, Kirchmeier said. bout 11 a.m. law enforcement fired on the device, which was then landed by the drone operator.

"The FAA has strict guidelines and regulations governing the use of drones around unprotected people and manned aircraft," Kirchmeier said in a statement.