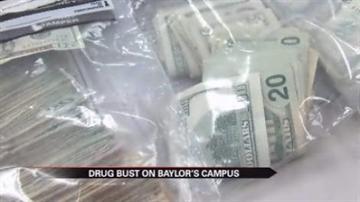 WACO, Texas — Drugs, cash and weapons were all found on Baylor University's campus.

Deputies were originally called to apartments in Waco on Baylor University's campus to find a DUI suspect.

When officers got there, they smelled marijuana and called in the drug task force to search the home.

They found drugs and even discovered the manufacturing of mushrooms.

"This is a dangerous situation combining narcotics, money and weapons," said Captain Shawn Lippe of the Mclennan County Organized Crime Unit. "We are very fortunate that none of our officers last night were injured or possibly killed."