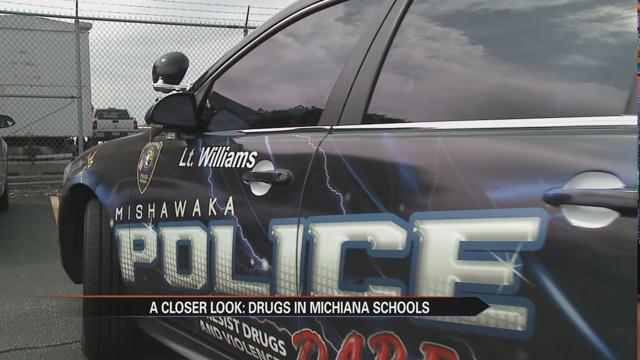 Fast forward to this week, a 15-year-old Penn High School Student was busted after allegedly giving a classmate a muffin baked with marijuana, causing that student to become ill.

“Obviously we look at those things seriously. Especially when a student doesn't know what they are ingesting,” said St. Joseph County Police Assistant Chief Bill Thompson.

Police say both marijuana and prescription drugs are too easily accessible to teenagers.

“We have a problem with prescription drug abuse in our schools. It's been something we've talked about for years now. That's one of the reasons why they do the pill drops,” said Mishawaka Police Lieutenant Tim Williams.

For 14 years he's been inside elementary and high schools, talking to students about D.A.R.E – drug abuse resistance education.

According to ABC news, the national program is used in nearly 80% of school districts in the country.

In the past, several studies suggested that the program does not have long-lasting effects.

Still, Williams said it is important to teach young students about the dangers of drugs before they are exposed to them.

“They go down that path. They're going to overdose and die or two, get arrested. And they're not going to be able to reach their goals and dreams,” he said.

He encourages students to find what he calls a natural high. Whether it is music, sports, or even playing video games.