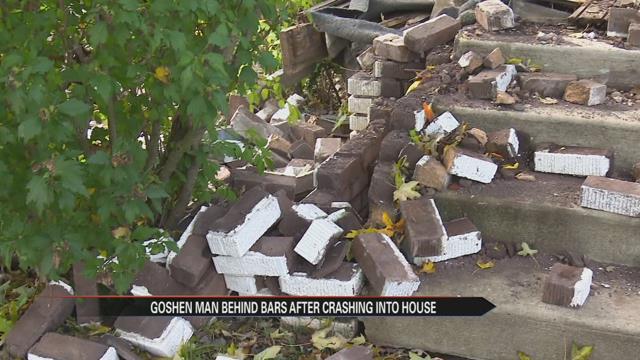 A Goshen man is behind bars after crashing into a house while driving drunk Thursday night.

“It was a loud crash to the point where you think it had to be a truck or something, hitting something big,” neighbor Trudy Smith said.

Police say 25-year-old Ethan Tobias slammed into the home on the corner of Dewey Ave. while driving drunk.

He lives next door to the home he hit, according to police.

Nobody was seriously injured because the tenants renting the home moved out last week, but the porch was severely damaged.

Skid marks along the sidewalk show the route Tobias took, landing inches from the front door.

Tobias hit the home with such force, a brick pillar holding up the left side of the porch had crumbled.

He was charged with operating while intoxicated, and was in the Elkhart County Jail as of Friday afternoon.

His roommate said off camera she doesn’t know where he was coming from, but she said he’s normally not a heavy drinker.

The homeowners, who were trying to sell the house before the crash happened, are waiting for a damage estimate from their insurance company.

They said Tobias is not insured.