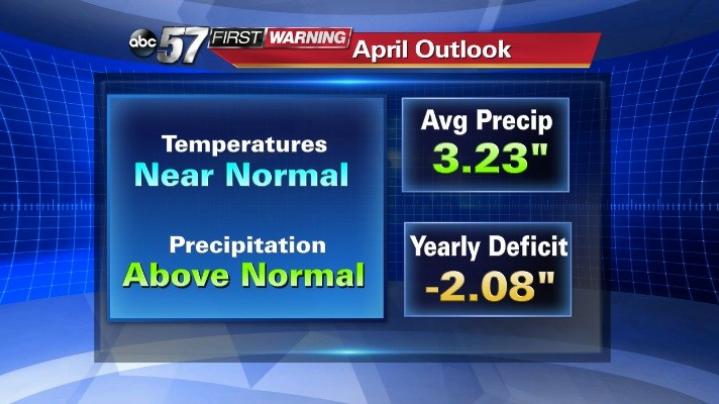 SOUTH BEND, IN - April started much warmer and less snowy than March.  If you remember from March 1st, the high only reached into the mid 20s and we had 1.2" of snow on the ground.  Now that we've turned over another month on the calendar, it's time to recap the month of March and see the outlook for the month ahead.

Over the course of the month, March only saw 13 days at or above the average high temperature, which ranged from 40° on March 1st to 53° on March 31st.  Fig. 1 shows which days were cooler than normal (light blue boxes), and which days were at or above normal (red boxes).  Even though the month was dominated by cooler days, we did reach a high of 72° on the 16th.

Now let's chat about the lack of precipitation in Michiana for the month of March.  The ABC 57 First Warning Neighborhood Weather Team was hinting towards the end of the month that March was going to be one of the driest March's on record.  Now that we have entered the month of April, it is now official that March 2015 was the fifth driest March on record, recording only 0.78" of precipitation (see Fig. 2 for the complete list of Top 5 Driest March's on record).  Since we were 1.64" below the normal precipitation for the month, why are we not considered to be in a drought?  Well, thanks to the snowpack that managed to hold it's keep through the middle of the month, when we add the 2.00" of water that the snowpack likely held, we are slightly above the monthly average precipitation (see Fig. 3).

Now that we've come to terms with a cool & dry month of March, what does April have in store for Michiana?  According to the Climate Prediction Center, Michiana will see temperatures at or just below normal for the month of April.  However, precipitation is likely to be above normal.  Not only are April showers great for May flowers,  this precipitation will likely close the gap on the yearly deficit for rainfall, which is up to 2.08".

Continue to stick with ABC 57 News on air and online for the latest forecast 24/7.  You can also download the ABC 57 First Warning Neighborhood Weather App to track the April showers right into your neighborhood.