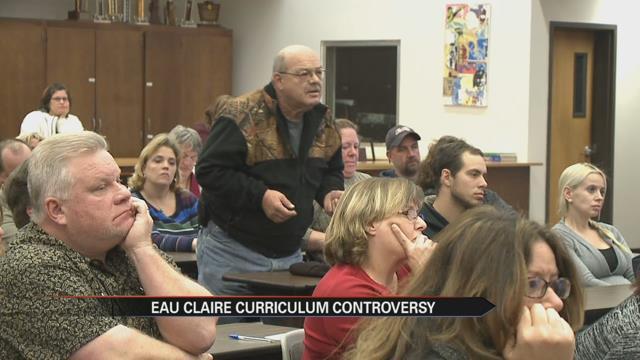 Eau Claire parents had a lot of questions for the school board Wednesday night as the controversy over a new curriculum continues.

The superintendent looked to set the record straight as rumors and complaints grew for months over the new EngageNY lesson plan taught throughout the district.

Many parents argued the material being taught isn’t appropriate for their students.

While some say the math content didn’t really help their children, others were disturbed by some of the material taught in the English Literature classes.

The mid-school year transition to the EngageNY curriculum by the district was the cause of much concern for these parents.

The district organized a parent informational meeting Wednesday in the hopes of alleviating those concerns by pointing out the need for the new system.

The board addressed the failures of the last curriculum come testing time, but some parents say teaching should expand outside standardized tests.

“I just want to make sure that what’s being presented is really going to useful for them in the long run and also that, we’re not just kind of teaching to cram for a test,” said parent Kellee Ferry-Shier.

The next hot button issue for parents was the content of some of the literature being taught in the primary school.

This book titled Nasreen’s Secret School tells the story of a Muslim girl in a Taliban-controlled territory.

Some parents heard third grade students were asked to memorize an Islamic prayer from the book as part of the lesson but that’s a rumor the district says is not true.

“They’ve also been vetted by organizations to find out to a totalitarian effect if this content appropriate for the age level and stuff like this and it was so from that standpoint the textbooks were not out of line,” said Eau Claire Schools Superintendent David Gray.