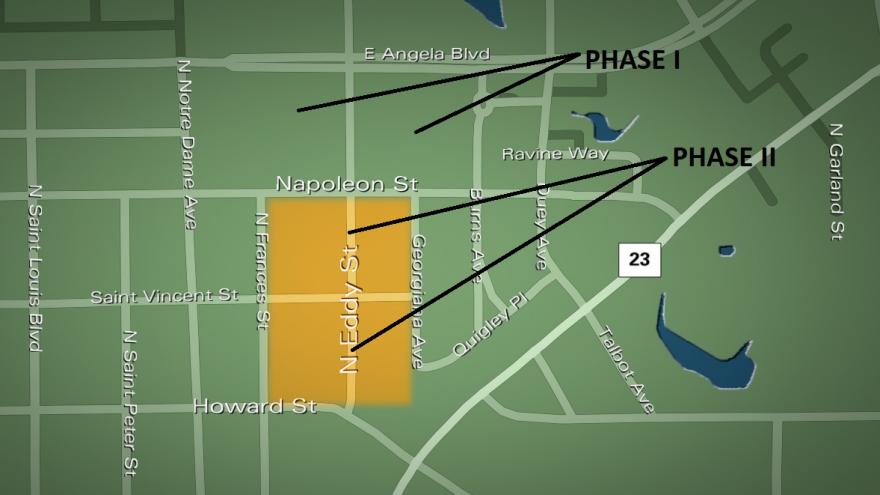 It’s been 10 years since Eddy Street Commons was first approved for construction just south of the Notre Dame campus and now phase II is breaking ground. The $90 million mixed-use project begins as phase I wraps up with its last part, a new Embassy Suites which is set to open next September.

This second phase, just like the first, is a joint effort between the university and Kite Realty. In phase I we saw condos, some restaurants and tall town homes that line Eddy Street. But in this second phase, you’ll see 8,500 sq. ft. of new additional restaurant space, 17 new flex units (modest street-level units that can be adapted for commercial or residential use depending on demand), over 400 new apartment units, and 22 new homes along with the possibility of a new grocery store and community learning center. Notre Dame says it’s all in the name of revitalizing and regenerating that area. City of South Bend officials who say the extension is becoming a big win for both parties.

“It’s a great asset for Notre Dame, it provides that village atmosphere that a lot of college campuses have and what’s really neat is that it’s starting to connect the university with Downtown South Bend,” said Tim Corcoran, Director of Planning with the City of South Bend.

Combined, the two phases represent a nearly $300 million investment in the Northeast Neighborhood, a diverse single-family neighborhood directly south of the University characterized by walkable, tree-lined streets and a mix of old and new homes.

“So probably one of the most interesting things is the Robinson Center is going to be completely rebuilt, have a new facility, and that there is the potential for a new grocery store on the corner of Howard and 23,” said Corcoran.

A stand-alone grocery store is proposed for the southwest corner of Howard and Indiana 23, where the Robinson Center now sits. The Robinson Center, an off-campus educational initiative of the University, will move to a new one-story, 13,000-square-foot building across the street.

Examples of the types of businesses that could occupy such spaces include small, local specialty shops, small cafes or coffee shops or insurance or law offices.

The building at the southwest corner of Eddy and Napoleon, diagonal from Brothers Bar & Grill, will feature 8,500 square feet of ground-floor restaurant space.