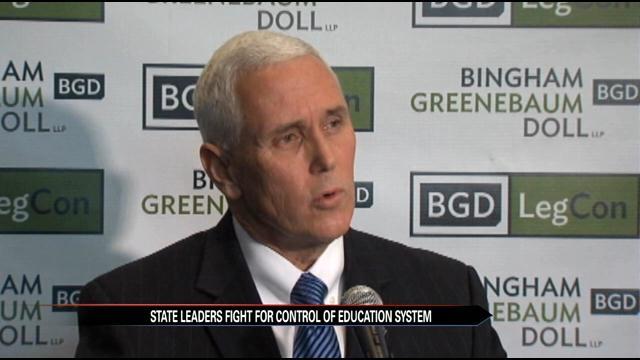 On Thursday Indiana Governor Mike Pence announced his legislative agenda for next year. Pence said he is dissolving the Center for Education and Career Innovation to restore harmony.

Superintendent of Education Glenda Ritz has called it a shadow organization working to weaken her authority. She's even walked out of board meetings on the issue.

But in the revamp process, the governor is also calling for the general assembly to give the state board the power to elect its own chair of education from among its members.

Current state law has Ritz at that position. This opens up an opportunity to undermine her authority at her position. And it could provoke more political friction.

"I'm not sure what that means, where that leaves the elected superintendent in terms of the powers that she would retain and the interaction then with the board," said Lanane. "I know the Governor says he wants to eliminate politics, but we have to remember he appoints all those members to that board."

Ritz said in a statement that she welcomes the removal of the center, but does have concerns about the governor's proposal and looks forward to addressing them in the next legislative session.