El Nino is here, so what's ahead for Michiana? 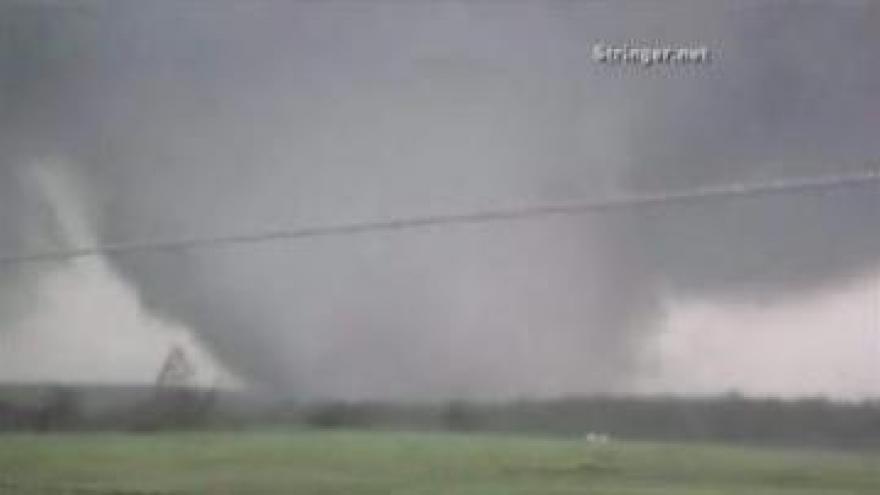 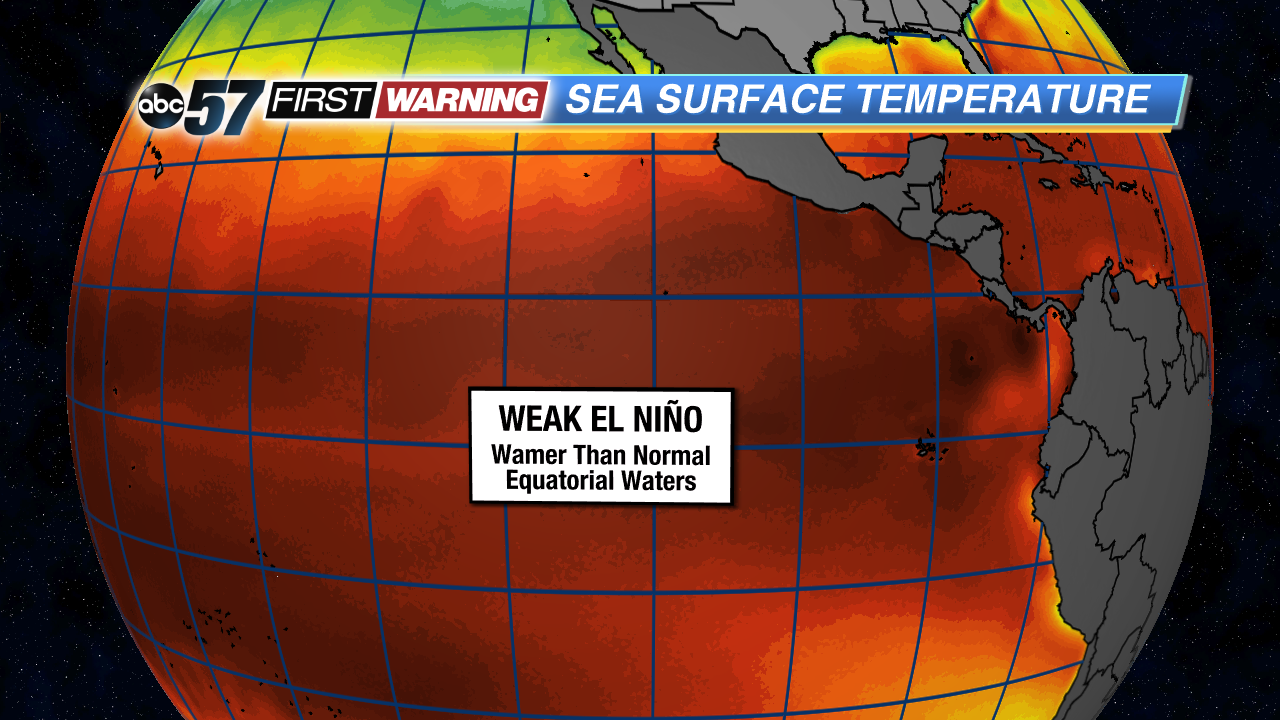 Warmer-than-normal sea surface temperatures in the Pacific Ocean near the equator.
El Niño is here! As of the latest update from the Climate Prediction Center and International Research Institute for Climate and Society, we are officially in a weak El Niño phase. This is due to the warmer-than-normal sea-surface temperatures that have been -- and continue to be -- present across the equatorial region of the Pacific Ocean. 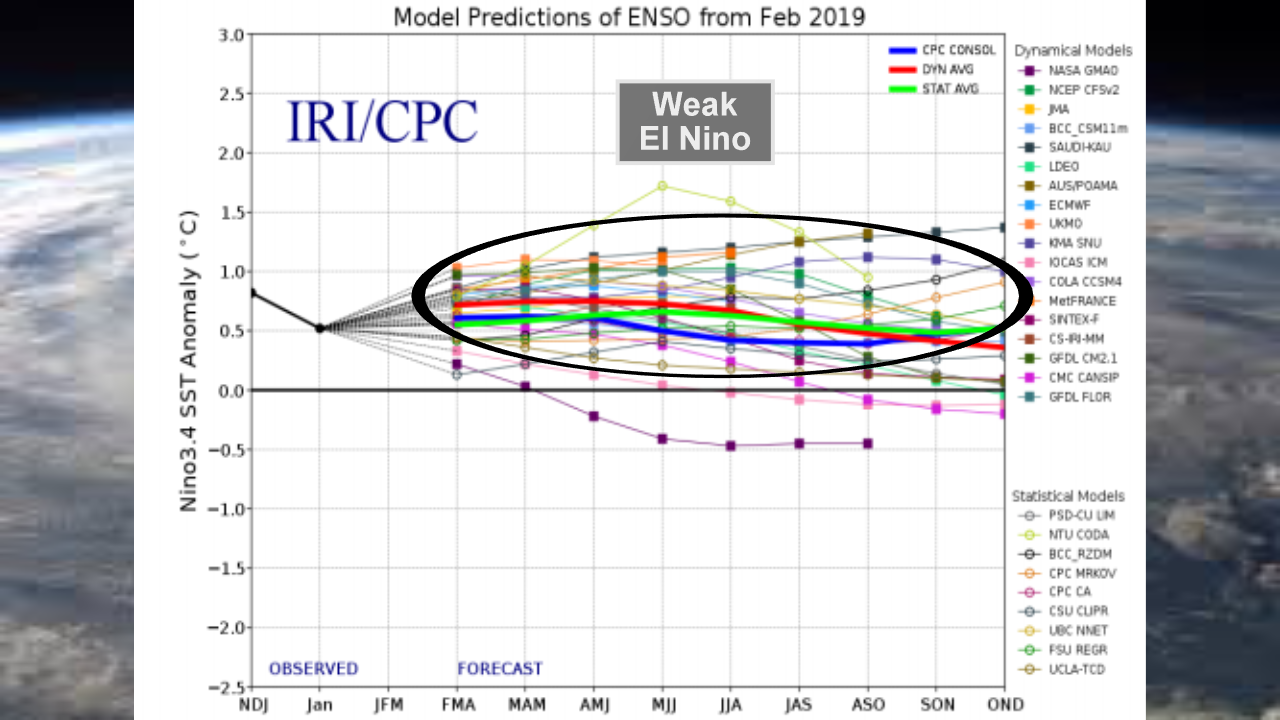 El NiÃ±o is expected to remain in place through at least the spring. Climate Prediction Center/International Research Institute for Climate and Society
Most forecast models and data suggest that El Niño will remain in place through at least the springtime in a weak state. The likelihood of El Niño strengthening beyond a weak state is very, very low. So, what does this mean for our weather? Put simply, not a whole lot. Due to the weakness of this particular El Niño, the climate pattern is not expected to impact or influence our weather too much. 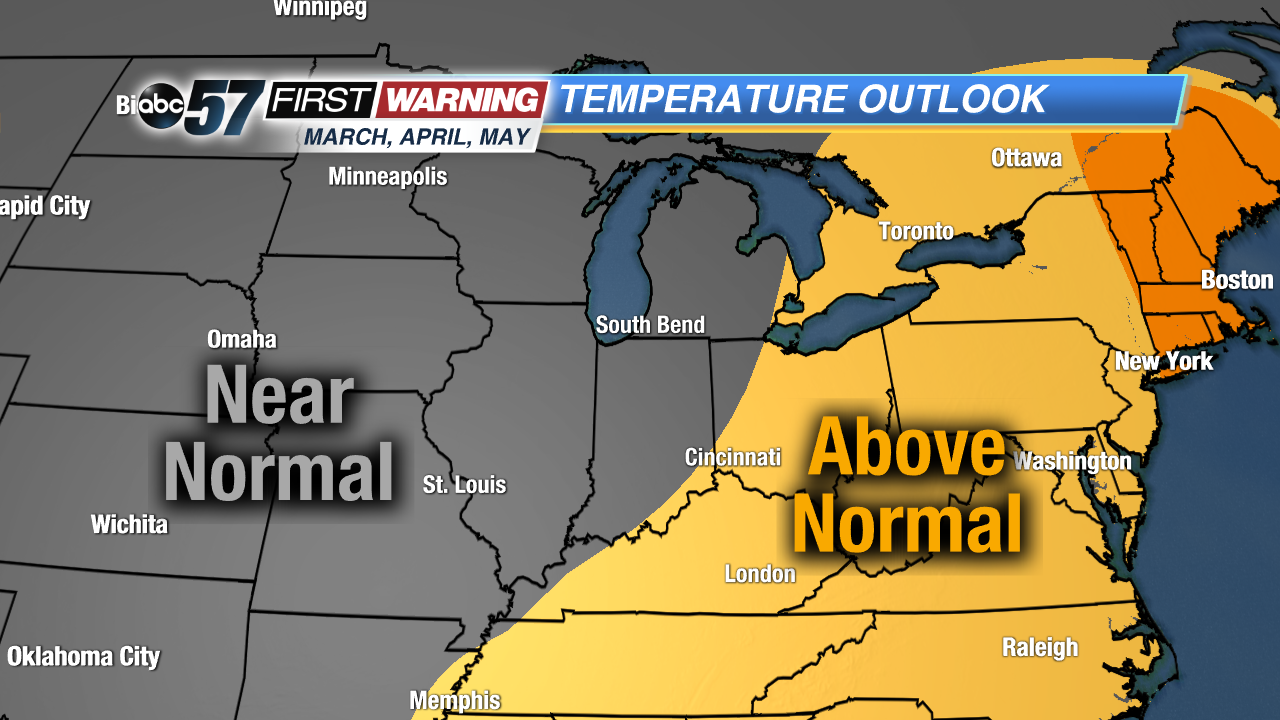 Temperature outlook for spring. CPC
Based on this state of El Niño and other climactic variables and trends, the Climate Prediction Center has issued their forecast for both temperatures and precipitation for the months of March, April and May. For temperatures, we have the best chance of seeing near-normal conditions. That translates to: 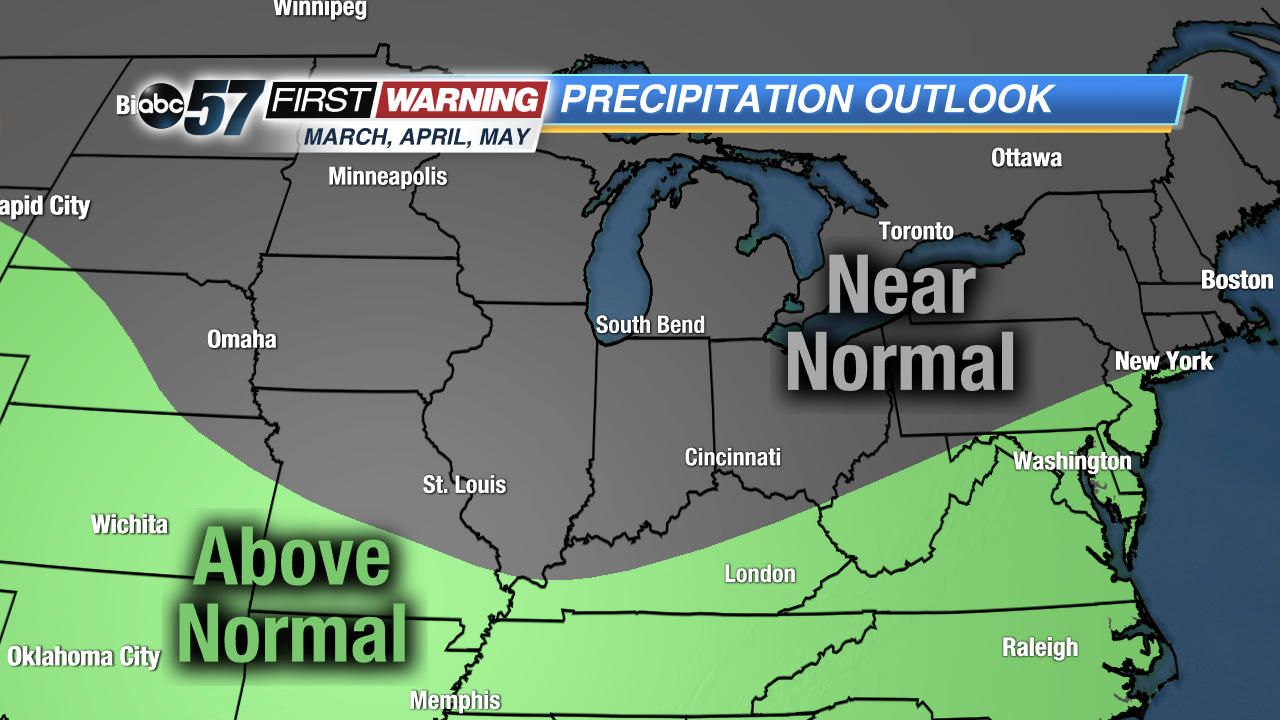 Precipitation outlook for spring. CPC
Of course, we will likely have cold and warm days mixed in, but the pattern doesn't scream "super cold" or "super warm." Similarly, Michiana is in the "near normal" category for precipitation. That means:

•March: near 2.4" of total precipitation (about 7" of that liquid would be snow)

•April: near 3.2" of total precipitation (about 1" of that liquid would be snow)

•May: near 3.8" of total precipitation

But what about things other than just temperatures and precipitation? Namely, severe weather and tornadoes. Unfortunately, it's quite difficult to break down the overall impacts that an El Niño or La Niña has on tornadoes in the Midwest. However, there have been studies that have attempted to make some connections. 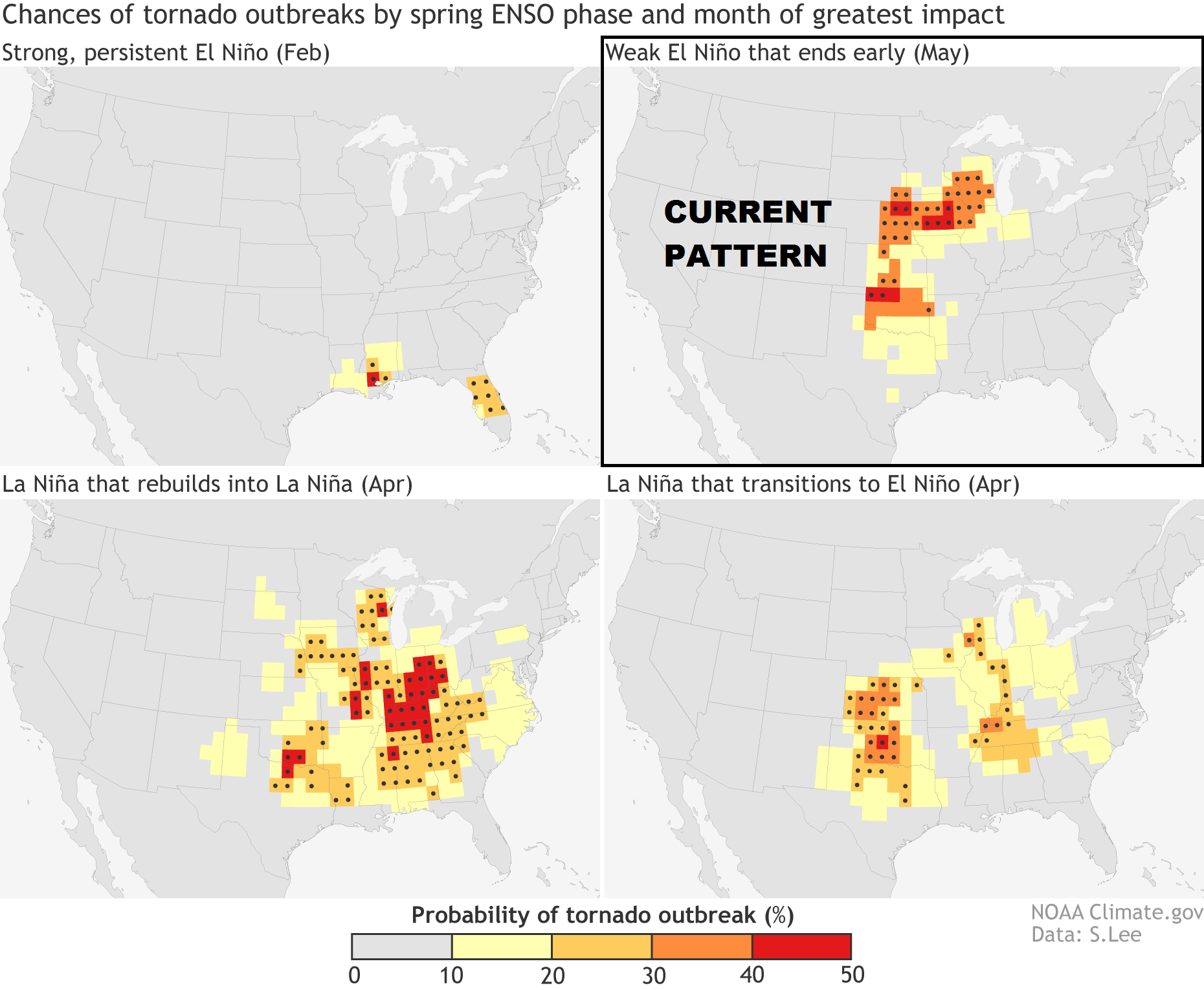 Chances of a tornado outbreak based on whether the conditions are a La NiÃ±a or El NiÃ±o. Climate.gov/Will Chong/Alison Stevens
One study was summed up and discussed here. The conclusions that were drawn show that La Niña years and years in which La Niña transitions to El Niño are the worst when it comes to tornado outbreaks in the United States. However, weak El Niño years oftentimes can lead to plenty of severe weather and tornadoes, especially in May. 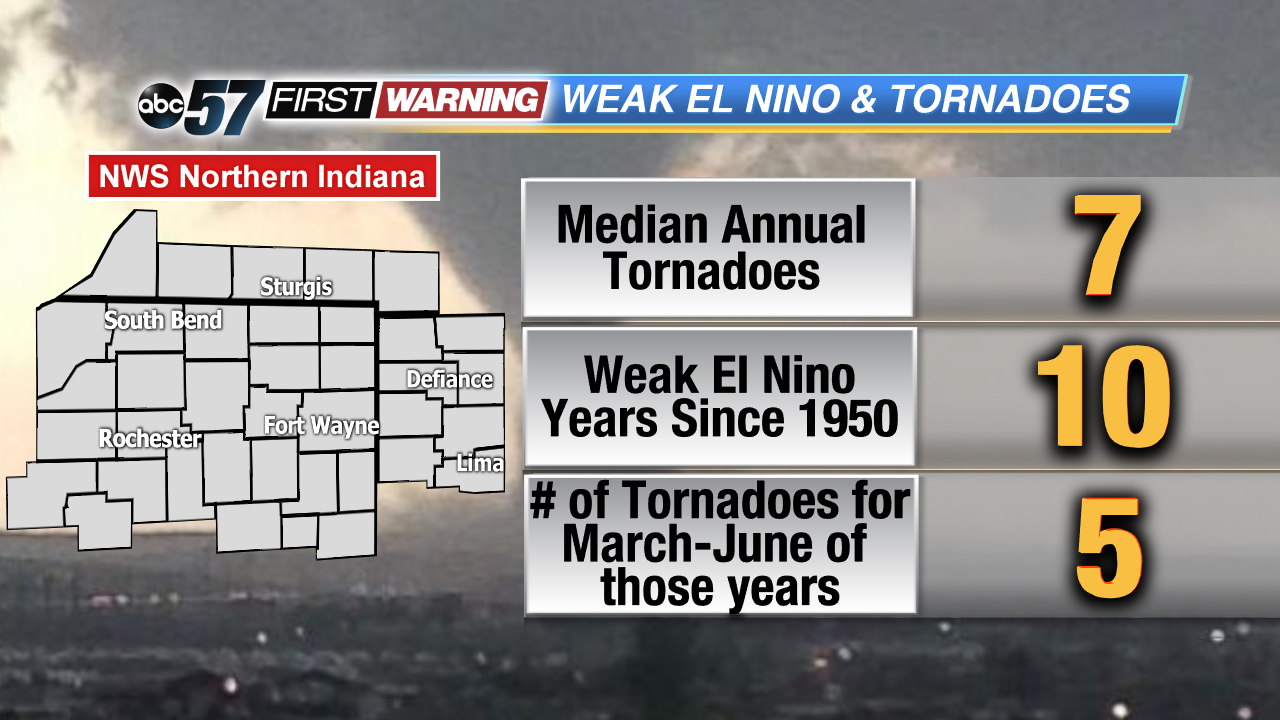 NOAA
It's important to note that findings aren't all exactly the same. A blog write-up from climate.gov breaks down multiple studies and shows that overall, El Niño years produce less in the way of both tornadoes and hailstorms. That is true not only for Michiana, but the entire country. On the flip side, the write-up shows that La Niña years typically see more hail and tornado activity for the Southern Plains, Lower Mississippi Valley and Middle Mississippi Valley. Again, there is so much out there that can be looked into. Predicting severe weather using climate variables such as El Niño vs. La Niña is nowhere near a perfect science.

We did find something interesting regarding El Niño and tornadoes in Michiana. Looking back to 1950, there have been 10 years in which a weak El Niño was the dominant phase. During the months of March, April, May, and June of those years, tornado activity was higher than normal across Northern Indiana, Southern Michigan and Northwest. Typically, that geographical region sees 7 tornadoes in an entire year. However, during the 10 weak El Niño years, the region averaged 5 tornadoes just during the four-month stretch of March to June. That may suggest that severe weather is more probable during the springtime in Michiana when a weak El Niño is in effect.