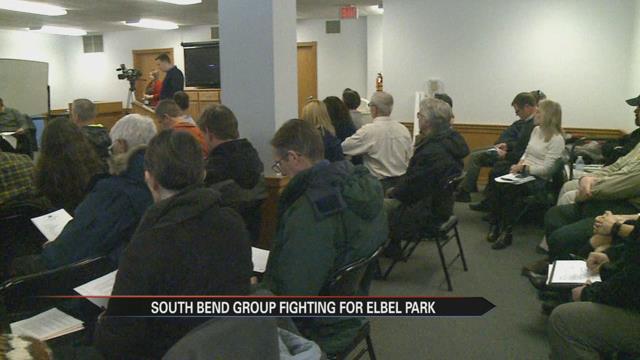 A number of concerned residents showed up to the first South Bend Board of Park Commissioners meeting of 2016 Tuesday night to stand up for Elbel Park.

City officials are considering selling the park and golf course, but a growing group of activists are doing all they can to prevent that.

The park came up almost immediately in Tuesday’s meeting, with five people speaking to the board as part of the activist group “Elbel for Everyone.”

The group is asking the parks department to reconsider its proposal.

Even though it was specifically noted on the meeting agenda that Elbel Park would be the topic of its own meeting in February, the group still showed up and spoke passionately about the park. They even handed some documents they had put together over to the commissioners to study.

Paul Blaschko is one of the group’s leaders and he said fighting for the park is for the community’s benefit.

“Just having a space where you can be in nature, where you can just sort of appreciate the ecological treasures that we have, that’s really important to me,” Blaschko said. “Educationally, we’re not gonna be able to teach our kids about nature if we sell 25-percent of our parks,which is what this proposal would do. And the members of our community just need access to that communal green space.”

Despite the large turnout of Elbel Park supporters, the commissioners made clear at the start of the meeting that lengthy discussions about the park and golf course would not take place until a special meeting being held on Feb. 11 at 5 p.m. at the parks department building.