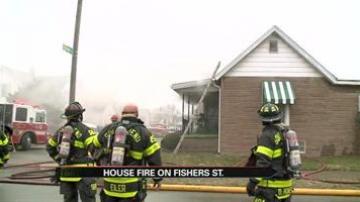 Neighbors say the elderly resident was not in the house at the time of the fire.

"We were initially called for smoke coming from a residence," said Rob Rose, Captain of the South Bend Fire Department.

The smoke was heavy and caused quite the stir in the neighborhood.

Neighbors say they noticed something wrong right away.

As crews rushed to the scene, neighbors ran to her house, worried about the elderly resident.

"I didn't know if something was wrong with her at that point," said neighbor John Phe.

Firefighters first rushed inside thinking she might be home, but she wasn't.

"It was a little bit of a stubborn fire, there was some void space in the attic between 2 roofing areas that met together," said Rose.

Crews believe the fire started in the attic.

Investigators are still working to determine the cause of the fire.