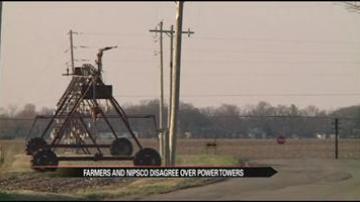 MILFORD, Ind. -- A major project is in the works to improve electrical power throughout Indiana. But to complete the project NIPSCO will be constructing several transmission towers on farmland.

Kip Tom's family has been farming the same land for over 150 years. They have more than 20,000 acres.

But big changes are on the way.

It will mean routing a 100-mile long electrical transmission line between Reynolds and Topeka Indiana.

The transmission towers will be constructed on farmland, including land owned by Tom's family.

“We need to make sure the towers are positioned in places that allow us to facilitate irrigating our fields and conducting our farming operations,” said Tom.

But he said for the most part they won’t be and already he’s seeing a decrease in operations.

“Our own studies indicate that we have a loss of $1,000 to $12,000 a year, just around an electrical tower that we’re standing underneath right now," said Tom.

NIPSCO plans to add 11 more to his land.

But landowners do receive compensation.

While Tom said he does understand the need for NIPSCO to strengthen their electrical system, he and other farmers are frustrated the route isn’t along train tracks or highways, places of least impact for landowners.

“There are ways they could have done that here but they chose not to and unfortunately it’s going to be the land owners bearing that impact because of their decision,” Tom said.

NIPSCO says they heard from several landowners and environmentalists before deciding on a route that has the least impact to residents.

“This transmission project is definitely an improvement for the entire Midwest region. It helps strengthen the grid for future reliability,” said NIPSCO Communications Manager Kathleen Szot.

Construction of the Reynolds Topeka Project will begin next year and is expected to take two years to complete.