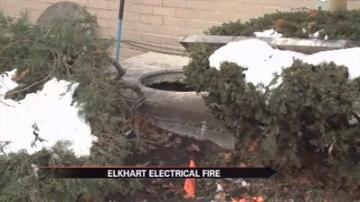 ELKHART, Ind. -- Three different Elkhart families and five others are displaced from their homes because of a fire.

An electrical fire on Moody Avenue caused severe smoke damage to an apartment complex that they called home.

The heavy smoke damage is proving to be more than just an inconvenience. The Elkhart Red Cross has stepped in to make sure these families have a place to stay and clothes for the next few days.

Kathy French was in her apartment cooking when suddenly she heard a loud explosion. Her lights flickered and then her power went out.

Moments later she saw heavy smoke pouring into her apartment.

"It was very scary because you couldn't tell where the smoke was coming from," said French.

When French realized the smoke was not coming from her apartment, she ran outside and that is when she saw the flames.

She quickly jumped into action and started pounding on doors, but one of her neighbors wasn't answering. So without thinking, she grabbed a nearby fire extinguisher and smashed in the bedroom window.

"She had headphones on, she was playing a video game. So, she couldn't hear anything, the dog barking, anything."

When firefighters arrived, they discovered a Comcast crew, replacing a damaged cable line, had accidentally hit an electrical line that was not marked properly.

When workers hit the line it sparked a fire underground in a manhole just below the apartments.

"I think it was very contained because of the ground and the concrete. So, when they opened up the hole and the firemen came, it smoked up the whole neighborhood."

But the damage is done. The families who call these four units home, including French, were told the heavy smoke damage was so bad they cannot go back inside anytime soon.

"There is absolutely no way you can sleep in that until its cleaned out."

The entire apartment complex was without power for a couple of hours, but AEP crews were hard at work to restore power.

As off 6 p.m., everyone had heat and power except one building.