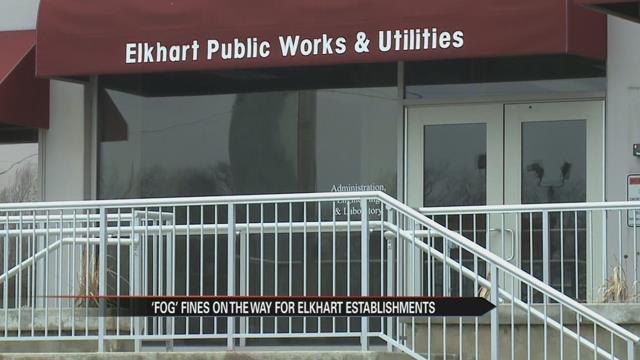 On Tuesday a major move was made in its efforts. Fines are now being enforced.

The fats, oils, and grease ordinance was passed to help keep track of the “FOG” food service establishments create and make sure they are disposing of the gunk properly.

Nearly a year later, crews are still trying to get everyone to complete step one of filling out an application.

Still though there are dozens of spots that haven’t followed through.

The public works department had to go through the legal process so it could levy those fines and got that taken care of a few weeks ago.

Since then, they have reduced the list of 70 businesses facing fines to about 34.

The public works department is giving more than half of them until June 21st to avoid paying up.

“A lot of the restaurants around here are very small mom and pop shops. When they bring up something new like this it’s scary,” says Sopheap Long, Co-Owner of Lucky Donuts on Indiana Avenue.

Long says every penny counts when you run a small shop like hers.

But the fats oils and grease ordinance isn’t brand new.

The Public Works Department has been asking food service establishment to register their grease traps since august of 2015.

ABC57 news has been following this story since the ordinance was in its planning phase in November of 2014.

“When I got the first NOV notice of violation I thought what are we possibly being fined for?” says Long.

Long says she didn’t know what ‘FOG’ was and that is why her restaurant put off the application.
.
Luckily for her she took care of business just in the nick of time.

“We’ve been very patient but we are coming up on a year and need to move forward with the program,” says Lynn Brabec, the Environmental Compliance Supervisor of Elkhart.

Tuesday, fines were issued for 14 food service establishments and another 20 have until June 21st to avoid the initial $50 fee.

That amount will increase every month until it hits $250.

At that point the business faces an additional $250 fine every 30 days.

“It’s simply a requirement to fill out an application there’s nothing else that goes along with that,” says Brabec.

Brabec says she isn’t in the business of issuing fines. Her priority is running a clean system.

The city is under a 20 year order to stop sewer overflows.

“That is our main focus, keep fats oils and grease out of the sewer,” says Brabec.

Which is why Long says the form was no problem.

“We are tied to the city sewer so we have to think about the environmental aspect of that. We are in the business of food so it needs to be handled the right way so yea I understand,” says Long.

Establishments that need to fill out an application can click here or visit the utilities office from 8 a.m. to 5 p.m. Mondays through Fridays.