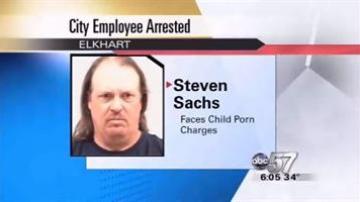 ELKHART, Ind. – An Elkhart city worker was arrested at his job by the U.S. Secret Service and a member of the St. Joseph County Sheriff’s Office, Thursday.

Steven P. Sachs, 52, is facing one count of receiving child pornography and one count of possession of the illicit material.

According to court documents, the investigation was conducted by the Indiana Internet Crimes Against Children Task Force. The U.S. Secret Service and, according to the Department of Justice, so did the Elkhart County Police Department.

A spokesman for the Elkhart County Police Department told ABC 57, he could find no one in the department that had any knowledge of the investigation.

The Elkhart City Police Department says they too had no idea the investigation was underway.

According to co-workers, Sachs drove a truck for the street department and has worked there for years.

After contacting the Elkhart Street Department, we were directed to seek answers from the Mayor, Dave Wood.

Mayor Wood was unavailable to talk to us, but his Executive Assistance Arvis Dawson did return a phone call; which resulted in him requesting that we contact him after 6:00 p.m. that evening.

Several phone calls to the number Dawson provided were not returned. The first was at 6:06 p.m. and three more times throughout the evening.

What was unclear is if any of those items belonged to the city of Elkhart.