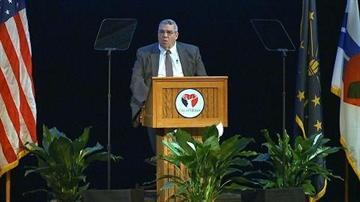 ELKHART, Ind. – From the outside looking in, the city of Elkhart is “doing pretty well” according to Mayor Dick Moore.

According to Moore, Elkhart is rebounding after one of the most difficult economic times since the Great Depression. “We weathered the storm pretty well; had some tough times. We’ve come out of that, we’re now leading the nation in recovery as a matter of fact,” said Moore.

And while Moore continued to praise the RV industry for getting Elkhart through the toughest of times, he said the city has to find ways to diversify if it wants to continue to grow. “Everybody is looking for green, everybody is looking for high tech; the competition is great; you have to be a city that is an attraction to others,” said Moore.

In 2011, Moore said the theater would play a big role in bringing businesses to the city. He stood by that on Wednesday night.

Moore said it would be years before the theater could stand on its own financially, but the impact it has cannot be measured in dollars and cents.

According to employees at small businesses near the Lerner Theater, business has picked up significantly since it reopened last year.

Despite this, many storefronts are empty on Main Street on the blocks north and south of the theater.

Moore is eager to hear ideas from a citizen group on how to turn that part of town around; and perhaps the next time he gives his state of the city speech, some of them will be full again.