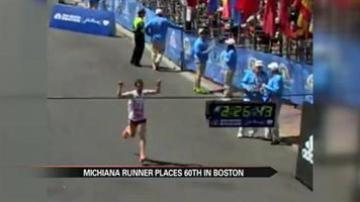 MIDDLEBURY, Ind. -- About 36,000 runners participated in this year's Boston Marathon. A Middlebury resident returned to run the race again this year just one year after two explosions took three lives and wounded 264 others.

Andy Williams is an avid runner and a teacher at Northridge Middle School.

He said he finished 60th overall this year and beat his personal best with a 2:26:38 finish.

"The atmosphere is just amazing. Last year I kind of felt like it was just almost overwhelming enthusiasm and the crowd gets you pumped up and it really gives you that extra energy that you need at the end," said Williams.

Williams ran in last year's Boston Marathon and was there when the bombs exploded.

He and about 36,000 others participated this year. It was the second highest attendance in the marathon's history.

"They still had a really great crowds along the sides during that last half mile or so, so that was really great to see that they didn't stop that because that's just one of the special things about Boston is that the incredible crowds are just right there to cheer you on the whole way," said Williams.

He says with heightened security and at least double the police presence, he never felt his safety was in jeopardy.

"They were very visible and just readily available if people needed anything. So safety wise it seemed like they had things very well covered, it was very organized and everything," said Williams. "This year I felt like the energy was still there but it was a little bit different of an atmosphere, instead of just the crazy enthusiasm it was a little more reverence and respect."

As he drives back to Indiana, he said he carries the memory of those who lost their lives last year.

"People don't want to have to live in fear from these things and it was great to see that so many people want to continue on with this great tradition and keep going in the right direction," said Williams.