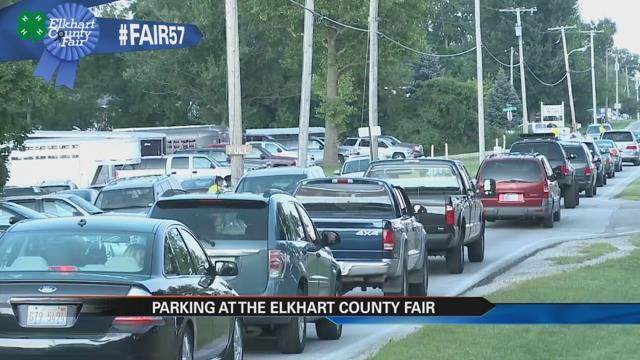 If you have been to the Elkhart County 4-H Fair before, you know traffic and parking can be an issue. This year fair officials are trying their best to keep traffic moving.

“The route into the fair is pretty much the same along CR 34 this year but we made some improvements at Gate 7. This year we have a 200ft acceleration lane which adds another lane of traffic coming into the fairgrounds,” said Bryan Blair, General Manager of the Elkhart County 4-H Fair. “I think the best advice is to come early, plan to come early and stay late at the fair. Peak time inbound is usually around 4 or 5 p.m. especially on concert nights when we expect higher volumes.

At Gate 7, one of the main entrances, they are also preparing for folks leaving during the peak time.

“We've also widened Gate 7 into four lanes so we could theoretically have three lanes coming in and swap those at the end of the night in order to expedite people leaving the fairgrounds,” said Blair.

Officials hope that you will stick around after the concerts. It would keep everyone from leaving at the same time.

And there's still plenty to check out at night.

“Our exhibits are open until 10 so there is a lot to look at. Our midway and the fair stays open until 11 so a concert will let out around 9 or 9:30 there is still an hour and a half to walk around and see, ride rides and eat food,” said Blair.

If you don't want to drive, you could always bike.

“We do have the bike path all the way down from GHS down CR34 right out to the fairgrounds so you can park literally right out by the extension office by the bike lot and have easy access in and easy access out,” said Blair.