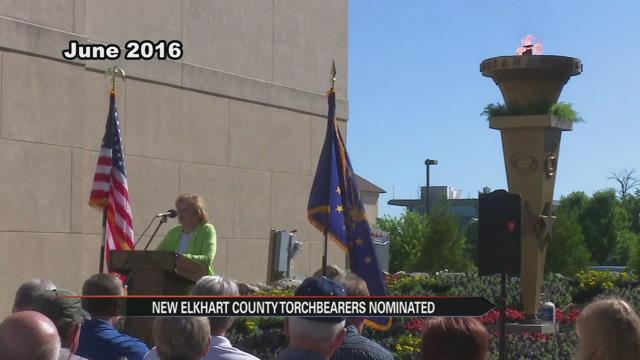 In less than a month a big celebration is coming to Elkhart County and now more people will be joining in. The Elkhart County portion of the Bicentennial Torchbearer Relay will now have 40 participants.

Originally 28 torchbearers were nominated by the community and when the list was revealed in June some said it was not diverse enough.

“It’s to the credit of a place like Elkhart county that this was allowed to happen there has been a change in the way it was done and it will better reflect the communities,” says Richard Aguirre of Goshen.

Aguirre is talking about this original list of 28 torchbearers nominated by the community and not having a single African American or Latino included.

“It was simply we just didn’t think about and that’s what happen in communities with a lot of diversity we need to be very intentional about it so we learn that lesson,” says Mike Yoder, Elkhart County Commissioner.

Commissioner Yoder says the bicentennial celebration committee did not realize it needed to work harder to make sure everyone in town knew about the nomination process.

“We saw that that didn’t happen and we recognize that we are not the county we were 40 years ago we are much more diverse and we need to reflect that when we go out in the public,” says Arvis Dawson, a member of the selection committee.

Dawson was one of about 25 community members who got together to select 12 Latinos and African Americans who have made an impact on the county. In October, they will be a part of the 200th year celebration.

“Attention should be brought to situations that don’t seem fair to people,” says Aguirre.

Aguirre says it is more than just about this relay it is about getting diversity included in decision making. That is a lesson community leaders says they are open too.

“When we do community wide events we need to be intentional about how we communicate with all these different community whether it’s Asian or African American or Latino or Amish,” says Yoder.

The 12 new torchbearers, 6 Latinos and 6 African Americans are in addition to the original 28 nominated.

Read about all 40 Torchbearers and how they have impacted Elkhart County below.