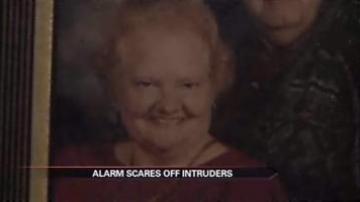 ELKHART CO., Ind. -- On Wednesday morning, a 69-year-old Elkhart County women woke up with a gun in her face.

Two armed men had broken into her home and were threatening to kill her if she moved.

Thanks to some quick thinking, she's safe now.

Shirley Neel was wearing a Lifeline device around her neck. You push the button if you need medical help. In this case, the company called police and that was enough to scare off the intruders.

"What she woke up to was a flashlight in here face and a handgun and they were demanding money," said Shirley Neel's Son Paul Neel.

He said as soon as the men left Shirley called him as he was on his way to work in Mishawaka. He ended up taking off for the day to be with his mother. Shirley turns 70 next month on September 9th. However, her family thinks her life may have been cut short of that milestone during a robbery today, if it wasn't for her quick thinking and her Lifeline medical device that is connected to a remote she wears at all times around her neck.

Paul said, "actually after she activated it didn't make one of the intruders to pleased because they heard the alarm, the box go off, and it talking and he actually took it and ripped it from her neck and threw it."

Shirley was too shaken to go on camera, but told ABC 57 the two men who broke in covered her windows with blankets that they found in one of her closets and ransacked her house looking for valuables. Once they made their way into her bedroom they forced her to keep her face underneath her covers and put her hands on top of the sheets or they said they shoot and kill her.She managed to sneak her hand underneath the sheets to press the Lifeline button.

The men ended up taking two jewelry boxes that contained jewelery that Shirley owned for decades, including two mementos that had special meaning to her, the items belonged to her late husband who passed away five years ago.

"One of the rings they took was a ring that they made for their 25th anniversary, and there was a watch, and one of the watches was his from his 25th anniversary at work," said Paul. He also said  the watch is easy to identify because it says the company name NIBCO.

Shirley Neel retired from Elkhart Community Schools as a librarian. She still wears her matching anniversary band in place of her wedding ring to symbolize the love she shared with her husband.

Paul is very proud of the way his mother reacted today under pressure, "but I think right now some of the reality is setting in, you know a couple hours later we're just processing what really happened," he said.

"Usually when you're sleeping it's a little bit harder to react to situations like this and she did a really good job and I'm thankful that she had that device," said Captain James Bradberry with the Elkhart County Sheriff's Department.

The Elkhart County K9 unit came out to search the area, but they didn't get far. The two men have not been apprehended and Captain Bradberry is asking the community for assistance in solving this case.

"We need any little tip we can use, if you have a description of the vehicle that may have been driving slow in the area, whether it's just a color of car or pickup truck or whatever," said Bradberry.

If you have information on this crime call the Elkhart County Sheriff's Department at (574) 891-2100.

Crime scene investigators had to take Shirley's Lifeline device for evidence. Meanwhile, her son Paul was able to get a hold of Elkhart General Hospital Home Health Care who supplied the device and this evening the company delivered and installed a new unit free of charge to make sure Shirley is protected.

Captain Bradberry said the home intruders entered Shirley's house through an unlocked front door. He is reminding all residents to always lock their doors and keep their windows are secured as well to help keep uninvited people out. Paul says his mother learned her lesson the hard way and will not be keeping the door unlocked again.