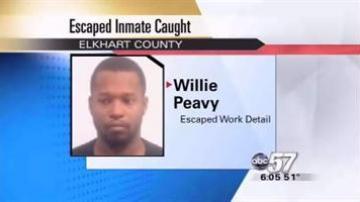 ELKHART COUNTY, Ind. -- Elkhart County police said that a work release inmate tried to make a run for it on Wednesday morning, but about 20 minutes later, he was back in the hands of the law.

At 9:24 a.m., officers were called about a man who escaped from the Elkhart County Work Release facility at 201 N. Cottage Ave.

30-year-old Willie R. Peavy fled from the facility and then broke into a home at 103 W. Wilkinson.

When police arrived on the scene, Peavy tried to get away through a back window on the home.

Peavy then ran to another home at 415 N. First St. and broke in. He tried hiding upstairs.

Goshen police brought a K-9 unit out and found him. They persuaded Peavy to surrender.

We looked on the Elkhart County Sheriff's Department website and found a RAP sheet showing his full criminal history. This isn't the first time he has escaped custody, resisted arrest, or violated his work release. The list of offenses is long and dates back to 2003. He has been arrested and booked 56 times. You can click on the photo gallery attached to review his mugshot history.

ABC57's Jessie McDonough will have more on this story in later editions of ABC57 News.