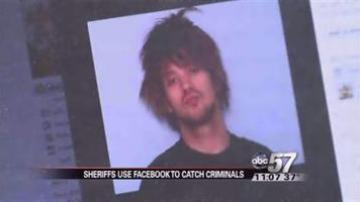 The Undersheriff Sean Holmes said the department has been putting wanted suspect's pictures, descriptions, and their crimes on the department Facebook page, and then the Facebook friends have been submitting tips on where to find the criminals.

"Typically on Facebook, we will get feedback going I knew that guy in high school like some of the warrants that we put on there...we will get some information that they know of," said Undersheriff Sean Holmes.

Undersheriff Sean Holmes says putting the wanted photos of criminals is helping to clear out the departments backlog of warrants.  He said that with such a big county, it is nice to have a couple thousand extra eyes to watch the community.

One of those thousand eyes is facebook friend Cindy Kosloski.  She says she goes on the department's facebook to check up on who is living in her neighborhood.

"To check sex offenders to find out if there are any in my neighborhood and mostly to see if there..more for when there is a missing child", says Facebook friend Cindy Kosloski.

And she says many people in her neighborhood put tips on the page.

"There was a robbery well right over here by the wall of heroes in the fall and that was on there and they wanted any information. The people who lived behind there put what they saw", said Kosloski.

She said the Facebook page does a lot of good; especially with relaying information to community and to the Sheriff's Department.

Undersheriff Holmes said he only puts offenders with serious felonies on the page.  He thinks the page is serving it's purpose well.