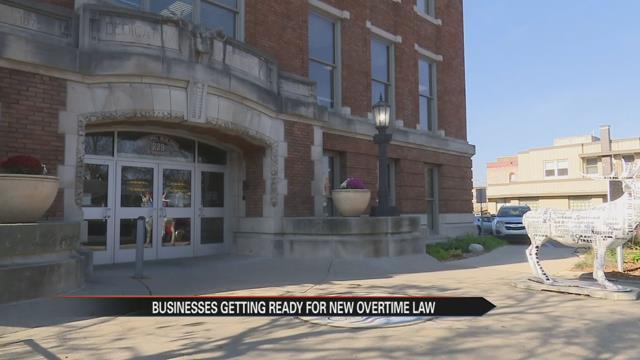 In about two weeks some salaried workers across the country will be impacted by a new, federal law. In Michiana employers are crunching numbers to figure out what’s best for business.

“There are a lot of laws that are just kind of old and no one looks at them for a while and somebody says we got to change this,” says Randy Arndt, City of Elkhart’s Deputy City Attorney.

Since 2008, you could make as little as $23,660, and qualify as overtime exempt, meaning regardless of how many hours you worked you wouldn’t see any overtime pay.

Starting December 1st, under the Obama administration salaried employees making less than $47,474 a year will be eligible to get overtime if they clock more than 40 hours.

“The city had enough sense to know the difference between what a person was getting paid and what a person’s job was,” says Arndt.

So now employers are dealing with two options, boost salaries or pay the overtime.

The city says it will shift about seven employees from salary to hourly.

A manufacturing firm I visited today thinks the government shouldn’t interfere with their payroll.

“It’s not our belief the government should mandate at such unusual levels,” says Gregg Fore, the President of DICOR Corporation.

Fore says he will have to change about 9 of his 130 employees from salary to hourly.

“When you take that away from people it’s a real negative and it keeps business like ours from finding opportunities for people,” says Fore.

So to avoid a spike in wage costs fore says some opportunities for entry level positions will no longer be possible.

“Because of all the overtime hours they rake up, for our creative people or young engineers who may not hit that threshold in their first year it keeps them from having opportunities to do things,” says Fore.