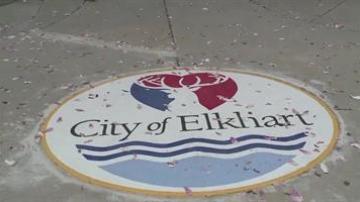 ELKHART COUNTY, Ind. -- The Elkhart City Council has called a special session to discuss the sewer agreements. Business owners and Valley View homeowners are fed up. They have hired a lawyer and handed their legal complaint to Mayor Dick Moore.

"It's like the Bop It game in the arcade. The old chipmunk pops up and you bop the chipmunk and another one pops up and you pop him again," said Steve Schemenauer of Elkhart Citizens for Fair Sewer Rates.

The mayor is sticking by his proposal to charge county residents based on how much their property is worth.

But business owners and Valley View residents are outraged.

"That makes no sense. It's like you going to the gas station, and they say, 'Oh you have a Cadillac, so we are going to charge you $6 a gallon for gas.' And, 'Oh, you have a little Pinto, we'll charge you $3 because you have a cheaper car,'" said Schemenauer.

A group of about a hundred people who are being affected by the sewer rates put thousands of dollars together and hired a lawyer.

They say they don't mind paying for the sewer connection, but they want to be charged based on usage.

Their lawyer says the mayor's proposal is against the law.

We tried to speak with the mayor but he was out of the office.

We reached out to a legal expert with the University of Notre Dame to try to better understand whether the mayor's proposal could be illegal.

He showed us a statute that says "sewer rate must be just and equitable."

But it also says a city can use one of ten factors to establish sewer fees. Number ten on the list reads '(10) any other factors the legislative body considers necessary.'

The expert says that might just be the loophole that would save the mayor and the city from getting sued.

The meeting Thursday night is expected to be a heated one. Business owners and residents say they will be at the meeting and it is the first time they will meet with the mayor since they gave him the legal complaint.