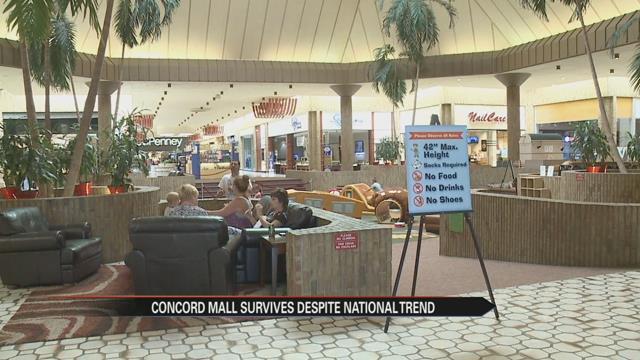 Nationally, analysts report more than two dozen enclosed malls have closed since 2010. In Michiana, one mall says paying attention to the details has kept it afloat.

“Our stores are really very well suited to the demographic and psychographic [sic] here throughout Michiana,” says Robert Thatcher the General Manager of Concord Mall.

The New York Times says about 180 malls throughout the county have empty space with some reaching vacancy levels of 40-percent.

Concord Mall in Elkhart has a vacancy rate of about 8-percent.

Thatcher says picking a variety of shops and anchor stores that are attractive to the community like Hobby Lobby, JC Penny, and ABC Hardware lend to the mall's success.

“Turns out leasing is an art and a science,” says Thatcher.

Not only are the stores important but Marketing Director Deb Alwine says in today's competitive market it's about providing an experience.

“Just to involve the whole family in everything so when mom comes to shop or dad comes to shop the kids can enjoy things and we try to do a wide variety of events,” says Alwine.

Throughout the year, Concord Mall hosts over 100 events and management says they have seen a hefty return on their investment.

“We know that we had a dozen stores last year that had double digit sales increases,” says Alwine.

Long time resident Laura Denman says over the past 10 years she has seen upward changes.

“Recently I feel it's getting back to being a lot more popular Hobby Lobby has brought in a lot of business and obviously there is die hard JC Penny and Carson's shoppers,” says Denman.

But some shoppers from other generations don't see the mall as a community meeting place they once were known to be.

“I usually go to the nail salon and get pizza but other than that there aren't many stores that I shop at,” says Vitaliya Skorobogatko of Bristol.