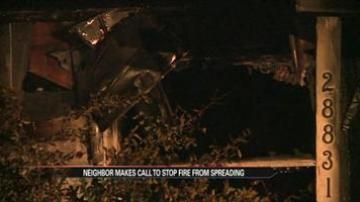 ELKHART, Ind. -- An Elkhart neighborhood experienced a scare early Friday morning when an abandoned house went up in flames.

Crews were called out to the 28000 block of Driftwood Drive just before midnight Friday.

Officials say the house is a total loss, but they were able to prevent the fire from spreading to nearby homes because of one man's quick thinking.

The abandoned house had been uninhabited for years.

Steven Yoder lives directly across the street from where the flames broke out overnight. He says that when he saw the flames, he didn't waste any time reacting.

"I reached up, grabbed the phone and dialed 9-1-1 automatically and got them out here as fast as I could," said Yoder.

Baugo Township Fire Department was on scene within minutes after Yoder called. The crew was a little short-handed due to the 4th of July weekend.

While crews were battling the blazes, Yoder was knocking on doors.

"I started knocking on elderly people's doors that I thought would be asleep," said Yoder. "I don't want to see someone get burned alive, I'd rather have them outside away from their homes."

Although there isn't enough evidence to determine an exact cause, investigators are considering the fire intentional.

Community members and crews agree that the situation could've been much worse, had it not been for one man's hustle.

"You've got to take care of your community and take care of the homes," said Yoder. "That's what neighbors are for, try to make your neighborhood shine a bit more."