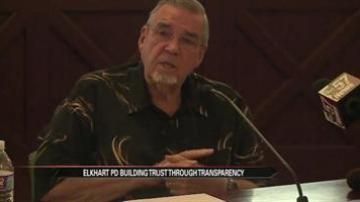 to ease tensions between some citizens and Elkhart City Police.

Friday, Elkhart’s Mayor Dick Moore held a press conference where he announced that new uniform cameras could be part of a solution to regain citizen trust through transparency.

Abc 57 went out into the community to get reaction to the Mayor's press conference.

Garfield was lined with cop cars, crowds of people watched as Elkhart Police Officer Dustin Young got into a physical fight while trying to arrest Reese Haithcox.

Thomas says some of the officers doing crowd control were professional, but others,  "Took it to another level.  It was beyond disrespectful. They were out here showing us that they were going to do whatever they want.  Period."

At a press conference Friday, Mayor Dick Moore said Officer Young let his emotions get the best of him on July 3. "But who could blame him? He was knocked down, he was hit in the face over a dozen times.  I don't know how many of us could maintain any of our professional decorum in a situation like that," expressed the mayor.

But Moore admits not everything was handled correctly. "The major fault was that the officer should have been removed from the scene and that did not take place."

Daniel Weddington is in Elkhart resident who listened to the mayor’s remarks, he says the tension in the community is all about how people perceive the police. "If you are doing wrong then your perception is bad, but if you are an upstanding citizen, you go to work everyday, the police are not your enemy."

Back on Garfield, Abc 57 talked with Adrianna Wilson who witnessed the incident on July 3. "I have seen Officer Young in action before and he wasn’t that type of person, I have never seen Young act the way he did that day."

People who live on the Southside of Elkhart say it all comes down to a couple things. "You have to show respect in order to earn respect," explained Wilson.

"We have all got to get to know one another so we can trust one another," expressed John Church, who also live on Garfield.

At the press conference the mayor also talked about the need to make the city’s police department more diverse. He says the police department is hiring so he is asking that all who are interested, apply, especially people who will be able to identify with the community.