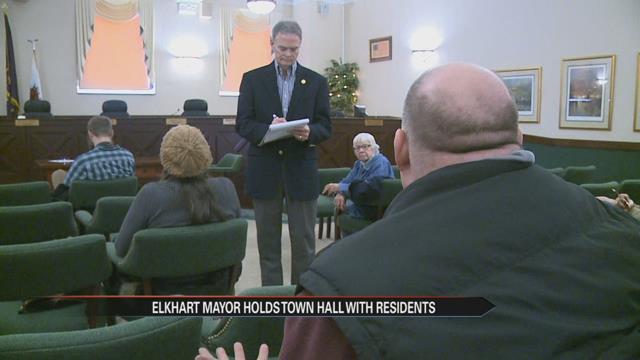 On Thursday, Elkhart Mayor Tim Neese held his first town hall meeting as leader of the city. He kept a campaign promise.

While running for mayor he held public forums stating that dialogue between him and his constituents would continue if elected.

“I don’t want people to get frustrated with city hall there are some things I can’t control,” says Mayor Neese.

On Thursday afternoon about 20 citizens filled city council chambers at city hall. They were there to ask Mayor Neese what was being done on a wide variety of topics.

When asked about sufficient side walk space for pedestrians in Downtown Elkhart Mayor Neese said “I will address that to the Elkhart Police Department that’s a matter of patrolling,”

Brian Replogle lives on Cassopolis Street off County Road Six. He attended the meeting and brought up the lack of sidewalks in his neighbor hood.

“I’ve had some concern for years and I just wanted to make sure I took the opportunity to voice those,” says Replogle.

Karleen Richter attended the meeting, too and brought up a topic that affects another population of the city.

“Are we including those people who have worked and lived their whole life in this city,” says Richter.

Richter says since the Elkhart YMCA closed in the summer of 2015, she has not heard plans of relocating the Senior Center that was inside the former Y.

“If you don’t have the finances to travel or to go south for the winter nothing helps you health wise like being with others and we just don’t seem to have that here in town,” says Richter.

Mayor Neese did not have a solution off hand but continued talking notes.

At one point in the meeting the roles were reversed and Mayor Neese asked the citizens for their advice. He wanted ideas on how to improve the notoriously congested intersection at Goshen Avenue and East Jackson Boulevard.

“I have been working with the city engineer as well as the consultants and outside engineers as to what is the best option for that and I want to hear what people have to say,” says Mayor Neese.

There will be more opportunities to share your thoughts with Mayor Neese at one of the following meetings.