Elkhart neighbors fed up with abandoned home, city says they will demolish "immediately" 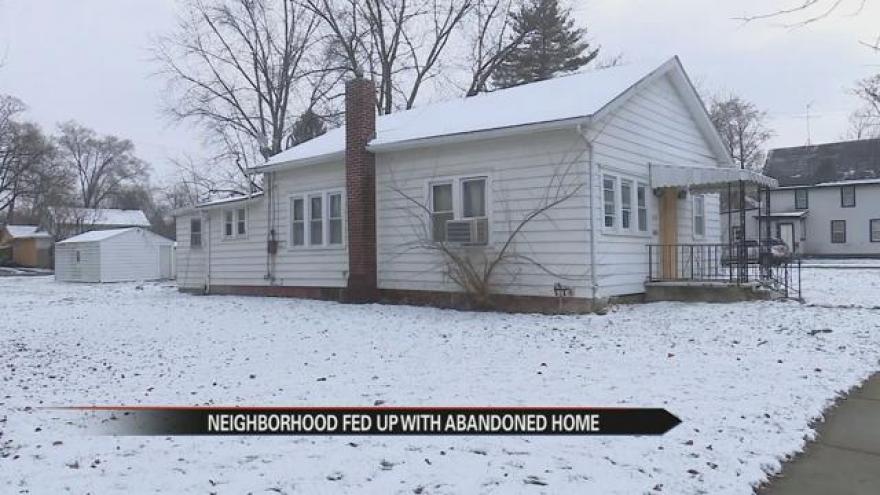 It's a home that's been abandoned for nine years, and now neighbors in one Elkhart neighborhood, have had enough.  Enough of the break-ins, people hanging around, the mold, and having that empty house on their street.

It's a quiet neighborhood, with friendly people. Albert Cole being one of them.

But one thing sticks out.  A home, right next to Cole's, falling in disrepair, and mold growing inside.

"In the summertime, I can't even go sit outside because of the smell...of the aroma coming from this home," says Cole. "It's that bad."

"My wife went outside and heard voices from the garage, and it scared her, and I called the police," adds Cole.

Cole's wife, Wanda, won't even go outside at night without some protection.  She's armed with a taser, mace, walkie talkie, and a knife.

But they're not the only one's concerned with that home.  87-year-old Emma Vegar lives across the street from it, and watches from the window.

"It's been empty for years now," she says. "And people just keep breaking in and tearing things up."

Neighbors wondering, why it hasn't been torn down or repaired.

Brad Hunsberger, Vice President of Real Estate Development for La Casa Incorporated, which helps eliminate unfit homes, says it should have been razed.

"It has a standing order for repairs or demolition, but the city has not taken action yet," he says.

In a statement released to ABC57 Friday, Mayor Neese's office says that the city's Code Enforcement has heard the many complaints from neighbors, and now will use local resources to move forward.

It also stated that, as soon as a demolition bid is awarded, demolition will begin "immediately."

"It's one of those properties that need attention, but sometimes a little patience is in order," he adds.