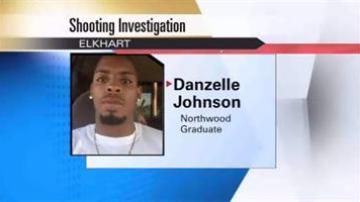 ELKHART, Ind. -- Elkhart are behind bars arrested for what was stated in a press release as "murder". The arrests stem from a home invasion situation that unfolded in the 1900 block of Francis Avenue around 2:30 p.m. on Wednesday that left Danzele Johnson, 21,  of Goshen dead.

Elkhart County Jail booking paperwork showed both teens live on Frances Avenue. One of the teens lives across the street from where the home invasion/shooting took place. The other teen lives in the 1600 Block.

Elkhart City PD said, officers responded to a burglary in progress at 1919 Frances Ave. Dispatch then advised that the homeowner stated that a man had forced his way into his residence through the back door and that shots were fired. Officers located two subjects inside his residence who had suffered gunshot wounds. These two men were not residents of the address. The homeowner advised that there were two other men that had fled on foot from his house as well.

Police caught up with one of those men in the 1800 block of the Francis Ave. He is one of the two 16-year-olds that are in custody now. The other teen is the person who was suffering from a gunshot wound who was found inside the residence when police arrived.

ABC 57 stopped by the house where the shooting occured in hopes of speaking with the homeowner. However, the man who lives at the home quickly made his way inside and would not answer his door.

Neighbors tell ABC 57 he is in his 50's and didn't get much sleep throughout the night. They say police removed the Johnson's body close to 10:30 p.m. last night and remained on the scene until close to midnight.

Police say the other person who fled the scene is still on the lose. When asked about that person Lt. Koch said they are still tring to locate that individual.

An autopsy was scheduled at 9 a.m. for the body of Johnson. Phone calls to the Elkhart County Coroner were not returned.

Elkhart City Police have made it clear this is a current active ongoing investigation. They are asking anyone with information on this situation to contact them at (574) 295-7070 or Crime Stoppers at 1 (800) 342-STOP.

He graduated from Northwood High School in 2009 and way involved in track and a standout athlete on the football team according to Tyler Sult, Johnson's freshmen college roommate at Saint Joseph's College located in Rensselaer, IN. Sult said Johnson attended the private Catholic college on an athletic scholarship for football.

He said Johnson transferred to Indiana State University to play ball the following year and he stayed in touch with him regularly via facebook.

Elkhart City Police tell ABC 57 Johnson does not have an arrested record in the city or Elkhart County.

Johnson's facebook states he was born on January 26, 1991. He is from Elkhart and last resided in Goshen.