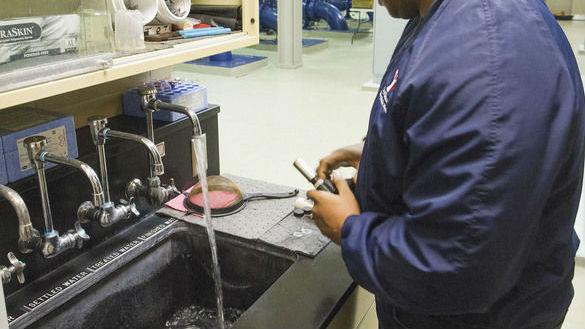 Elkhart is taking steps toward ridding the water service lines made up of lead based metals with hopes of avoiding anything like what happened in Flint, Michigan and other cities nationwide.

According to our reporting partners at The Elkhart Truth, the Board of Public Works approved a Lead Education and Disposal program that received more than $299,000 to identify lead service lines and replace the city's portion of those lines.

There are more than 20,000 water service lines in Elkhart and the city has records that identify the composition of most of those service lines.

The city is unsure of more than 2,000 of those service lines due to city records that were found incomplete. Laura Kolo, Utilities Manager for the city, said in February that she only suspects around 147 service lines in the city are lead-based.

Elkhart's LEAD program will locate and confirm residences or businesses that are being served by lead-based service lines. Then the city will be able to replace the portion of the service line it is responsible for.

Homeowners are then responsible for replacing anything from the right-of-way up to their home.

The $299,000 appropriated to the program includes some money for lead-based service line removal, but there is no timeline for when any lines found may be replaced. The city anticipates the over 2,000 service lines taking around 192 working days to identify.

Once the identification process is done, then the city will devise a plan for replacing the city-owned portion of those lines. For more details, click here.