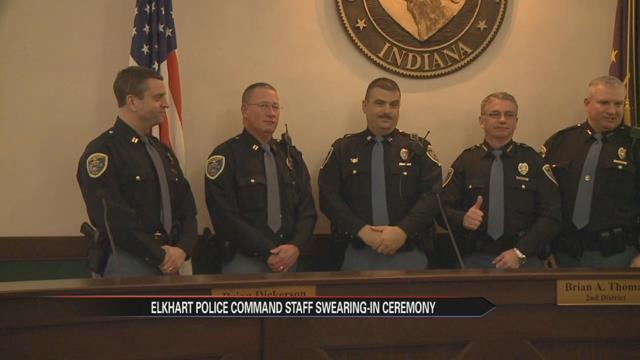 Elkhart Police's new Chief Ed Windbigler announced the members of his command staff on Wednesday. All city department heads were sworn in by Mayor Tim Neese during a ceremony at the municipal building.

"All four of those guys are people that I have known from the department. I know that they have high integrity and they all are ones that are willing to put in the extra time to make things work. They know how to treat people with dignity they are just all around good guys that I think will be very good for Elkhart," Chief Windbigler said.

The department released the following information about the new command staff:

Uniform Captain: Brent Long
Captain Long is a twenty two (22) year veteran of the Elkhart Police Department. Captain Long has nineteen (19) years as a supervisor including as a sergeant in the patrol division and the detective bureau, uniform captain and most recently the day shift lieutenant. Captain Long has also worked with the department anti-crime unit and with the Elkhart County drug task force.
Captain Long looks forward with working with the officers in the uniform division to ensure the safety of the citizens of Elkhart.

Detective Captain: Steve Price
Captain Price is a nineteen (19) year veteran of the Elkhart Police Department. Captain Price has served in the patrol division and detective bureau and most recently as the sergeant in charge of the homicide unit. Captain Price has also worked with the department’s anti-crime unit, Elkhart County drug task force and was a member of the special response team.
Captain Price is proud to have the opportunity to lead the detective bureau and looks forward to working with patrol officers, detectives and the community to help better prepare cases for prosecution.

Services Captain: Bryan Moore
Captain Moore is a nine (9) year veteran of the Elkhart Police Department with fourteen (14) years of law enforcement experience. Captain Moore has served as a sergeant in the patrol division and the services division and most recently a lieutenant of the afternoon shift. Captain Moore is the commander of the special response team, a field training officer and firearms instructor.
Captain Moore takes pride in making sure the officers of the Elkhart Police Department are properly trained and have the proper equipment to serve the community.