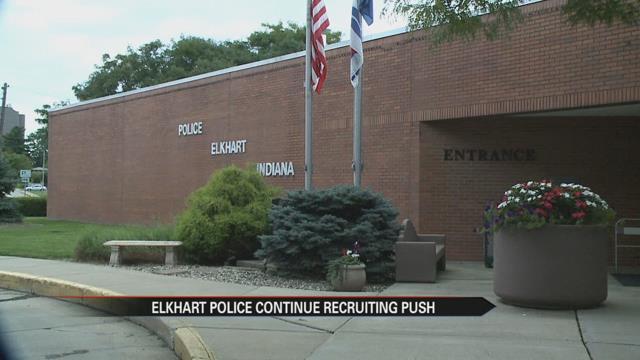 The fear of becoming a police officer is being felt by dwindling recruitment numbers.There are fewer applicants nationwide and right here in Michiana according to the Elkhart Police Department.

For several years now, videos showing police brutality and the use of questionable, deadly force have been in the spotlight, as well as attacks on officers, which is why Elkhart is doing what it can to recruit.

Dangerous and unpredictable are just two ways to describe the day in the life of an officer.

“it’s a dangerous job and people know that," said Dustin Young, Corporal with the Elkhart PD.

But Young knows there’s more to the job. So he’s doing what he can to make sure more qualified men and women join the force.
"We had a couple people that applied. Unfortunately after the Dallas event had to leave the department. We actually had two people that left the department during that incident," he said.

Because of situations like this, the Elkhart PD is understaffed.

“…and when you’re talking about a department with 126 officers, to be 10 down that’s a big percentage of your resources," said Snyder.

The department is working on adding to its force. After a job fair, it posted a video on social media. One that’s been shared hundreds of times and viewed over 22 thousand.

Elkhart PD also added a lateral transfer program where officers with experience get a higher pay and spend less time training. Nine officers are in training right now and that can roughly take one year to complete.

“Right now we’re at  about 13 officers that are actually out working short of what we should be because we have all those officers who are in training,” says Snyder.
Regardless of the dangers careers in law enforcement are for those who really want to make a difference.