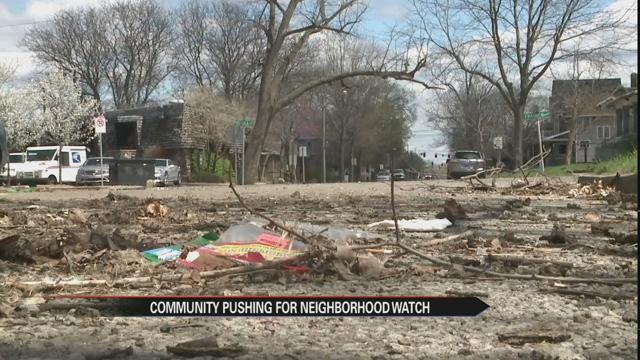 Elkhart residents who live near Vistula and High streets want a safe place to call home. Some in the area want to take action against the crime and problems in their neighborhood. They just need help getting started.

“It gives you a core reason to be together and that's improvement in living and quality of life within your neighborhood and in the city of Goshen and that's an awesome thing,” explains Ardean Friesen, co-leader of the East Lincoln Cross Roads Neighborhood Association.

There are 15 groups throughout Goshen organized so neighbors can work towards common goals.

“We had road issues, street issues, and some security issues that we were concerned about and that helped,” said Friesen.

Friesen says the city pushed for strong neighborhood associations back in 2002. Since then, he says he has seen improvement in street clean up, lighting, as well as better relationships with law enforcement.

Since January of this year, there have been about 145 incidents of robberies and burglaries reported in Elkhart. Goshen has a smaller population by about 20,000 but there have been just 41 of those reported crimes.

“It's just time we come together and clean the streets up,” says Justin McGinnis of Elkhart.

McGinnis lives in a neighborhood in Elkhart where he says the streets are littered with trash and he doesn't feel safe.

“I have had people break into my house and it's not a good feeling,” says McGinnis.

McGinnis doesn't belong to a neighborhood watch group and says one doesn't exist where he lives.

“I've thought about it a few times but never acted on it and I should have. Just got to get the right people and trustworthy people,” says McGinnis.

Friesen says he faced similar challenges when starting up his association but says the initial worry was well worth it.

“Organizing groups of people that don't know each other is always challenging. But overall I think it's a big positive,” says Friesen.

Dennis Correll, Building Commissioner of the City of Elkhart, says it's a very informal process to start a neighborhood association. Step one is contacting him and he will explain the process.
Share this article: