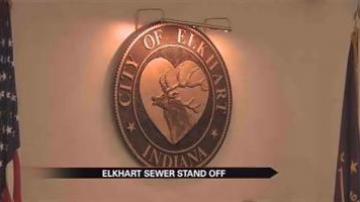 ELKHART, Ind. — There was a lot of tension at the Elkhart Council meeting Monday night.

When the floor opened up, several business owners and Valley View homeowners made it very clear that they feel they are being taken advantage of, and they just don't understand why something as simple as a sewer is becoming so complicated.

Homeowners and businessowners say they want affordable sewer rates, but say the mayor's task force won't solve the problem for simple reason. They say the members are biased.

"I've taken these cards, I've stacked the deck, do you want to play cards with me? You want to go to Vegas and bet against me when I've already stacked the deck? In Vegas, that's illegal, in Elkhart it should be," said Elkhart County business owner Steve Schemen.

The mayor says that a resolution will be reached but it could take a year.

That's too long for local business owners who need to make a budget or plan to move out of town if the sewer rates don't get more affordable.

For now, any business in the county that has not already signed the compact agreement will pay what businesses in the city of Elkhart pay to be connected to the sewer.

As for homeowners, Valley View residents say they feel like they are being left in the dark.

"I believe that Valley View is being swept under the rug. They haven't mentioned us and they've been focusing on commercial, however, we need to know where they are at," said homeowner John Nelson.

Doctors with the health department say all politics aside, severing sewer ties should not be on the table for discussion.

"There are reasons we teach our kids to wash their hands after going to the bathroom," said Dr. Dan Nafziger.