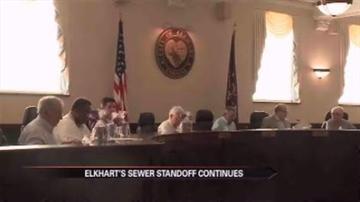 They took the floor and challenged the city council to take back their power.

Several council members agreed, saying the mayor meets with his task force illegally and they should not be the ones making decisions.

The council president called for the council to take action and will start meeting to discuss possible solutions to present to Mayor Moore and his task force.

"We’ve heard input, we’ve seen input, we’ve read input, and now it's time for us to do our responsibility," Troyer said.

Elkhart County business owners say they will continue to stand up for Valley View residents who are again being threatened to be severed from the sewer.

"Valley View’s issue is our issue as well. When you see injustice going on anywhere in the city then you have to stop it," said Elkhart business owner, Dave Schemenauer.

On June 2 the mayor is expected to try, for the third time, to cut sewer connections to the Valley View homes that have not signed the compact. The council says that they will try to meet before that so they can intervene.