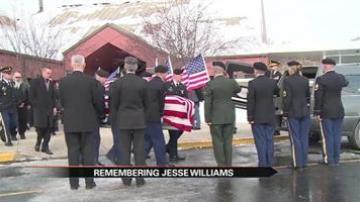 ELKHART, Ind. -- Army Staff Sergeant Jesse Williams was laid to rest in Elkhart on Friday. He was killed December 17th in a helicopter crash in Afghanistan.

"He was just so much more to me than what I could ever express in words," said Josh Sizemore who served with Williams.

Williams, 30, was a father, son, brother and friend.

"To lay down a life his own life for his friends, it seems such a petty thing to say thank you," said Representative Jackie Walorski, R-Indiana.

"From his unit, you heard nothing but the words professionalism and values and determination," said Brigadier General William Scott.

Janice Pleasant served with Williams and was with him on his last day.

"On that morning, as he walked out the door he smiled and he threw up the two peace sign, letting us know that we'll see him," said Pleasant.

"We owe you a debt of gratitude and we're grateful for the life of Sergeant Jesse Lee Williams," said Walorski.

"God bless you. We are so sorry about your loss and your sacrifice," said Donnelly.

Everyone who spoke talked about Williams' love for being a father.