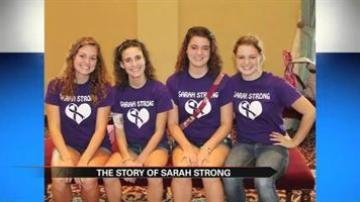 ELKHART, Ind. -- Sarah Crane is a 15 year old from Elkhart Memorial High School who is the youngest person in the country with her form of cancer.

Thursday night Sarah was at home with her family after receiving several rounds of chemotherapy at Memorial Hospital in South Bend.

Sarah's friends said she wants to spend as much time as she can with her family, because she doesn't know how much time she has left.

Gabby Graham said, “How are you dealing with it? And she said it’s nothing to be depressed about. I’m going to live every day like it’s my last. She’s really strong about it. A real inspiration to everybody.”

To her friends, Sarah Crane is known as Sarah Strong. Strong in her fight against cancer, and strong on the school's track team.

Adam Homo is Sarah Crane’s track coach. He said Sarah ran a six mile race just days before she saw a spider-like bruise appear on her back.

Sarah went to the doctor, and found out she had terminal cancer.

Homo said, “She had run two days before that and it was a six mile run. Just think about how difficult that must have been.”

Sarah's family and friends say the support has been overwhelming and strong.

That strength is needed now, more than ever, as Sarah's dad took to Facebook saying the cancer has spread to her other organs and is now considered inoperable.

Despite what doctors are telling her, Sarah refuses to give up and just had another round of chemo.