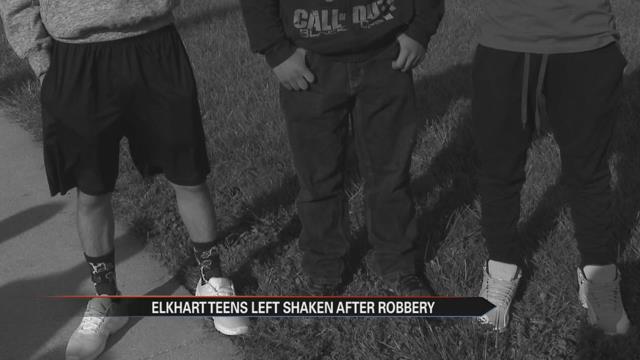 Three Elkhart teens say they were robbed at gunpoint.

Our reporting partners at The Elkhart Truth first reported the story on Monday.

The three Elkhart teens are speaking out, hoping someone helps them find six robbers who stole from them on Friday night at Pierre Moran Park in Elkhart.

Jacob, 16, Edrese, 15 and Micah, 16 wanting their identities to remain anonymous, say the men dressed in black, pulled a gun and stole three BMX bikes and their phones.

“Friday, about six people approached the gate, and they were asking if they had change for a dub. Or if we have change for tens so they could get drugs, they had taken my phone and my friend’s phone. Then they cornered us at the back and circled us,” said Micah.

“They tried to grab from my pockets again, and I kind of pushed him away. He put the gun to my stomach. I jumped the fence and went to get help so nothing would happen to them either,” Jacob said.

The teens say that the park was not properly lit.

Micah’s mother asked Elkhart Police to watch the footage to help find the masked men who did this; however, police have now marked the case closed.

“Is it going to take these guys shooting the next person for something to get done? Why are there no lights? Why is there only one way in to that park? These boys could have escaped without climbing that big fence,” said Micah’s mother.

She says that one of the BMX bikes was dropped off at the school Tuesday and left at the bike rack, unlocked.

For the teens, getting their sense of security back is important.

“We just want them because we want our stuff back and off the streets because they would cause more problems for more people,” said Micah.