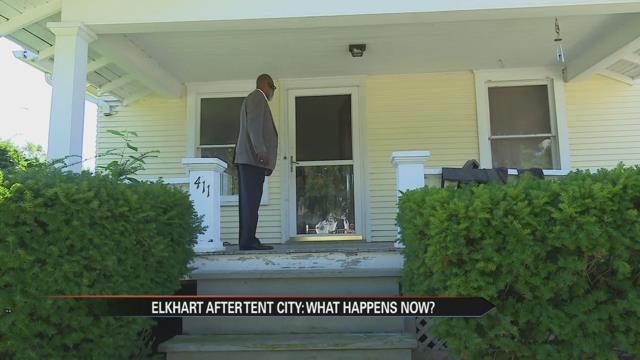 Community members are stepping up to help a few in Elkhart who have fallen on hard time. Dozens were left without a place to stay after the city cleared out Tent City on Wednesday.

The city's Buildings and Grounds Department began clearing the brush yesterday morning.
The land has not been purchased and Mayor Tim Neese says he has talked to three interested buyers.

On Friday it was move-in day for some former Tent City Residents.

“This is where it kind of makes me tear up because my buddy Billy in there is like we don’t deserve this,” says Mike Parker, who used to live in Tent City.

A local group of pastors made arrangements for affordable housing at just $30 dollars a week and they included some donated necessities.

“When people feel like there is no other hope man it’s awesome to come around and just meet that need and see that hope come back to them so it’s an awesome piece of work,” says Marvin Pace, a Local Pastor.

Pastor Pace along with two other pastors made deliveries to three homes where they are currently housing 10 former Tent City residents.

“People have helped us out and put us in a home and by the grace of God if we didn’t have them people we would be stuck in another park somewhere,” says Parker.

Parker says this home is a major upgrade from a tent in the woods.

Mayor Neese said when he first visited Tent City in May, it was full of human waste and makeshift meth labs.

Parker says that stuff is not welcome in his new home.

“In this house drug free, there is no reason why we can’t hold on to what we got and make it better and better,” says Parker.

The pastors have said this is temporary housing and will give tenants about six months to get on their feet.

The Mayor’s office says another proposal for the former Tent City is to transform the area into soccer fields, football fields and basketball courts.