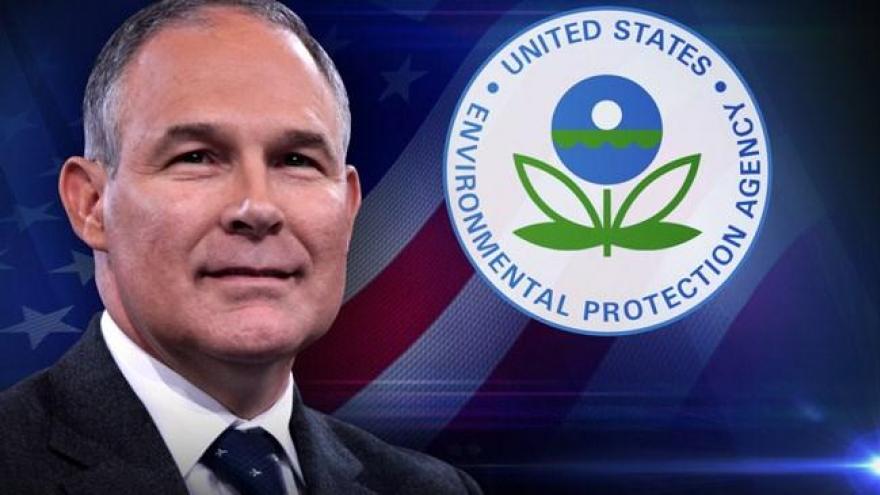 Two months later, Pruitt, who is now the head of the Environmental Protection Agency under President Donald Trump, signed a nearly identical version of that letter and sent it to then-Interior Secretary Sally Jewell. The only difference was the addition of the attorney general's official letterhead and a paragraph citing additional legal precedent to back up the letter's arguments against federal regulations on hydraulic fracturing, or fracking, one of the main ways Devon Energy pumps out oil and natural gas.

The episode was just one of several examples that highlighted the relationship Pruitt and his top aides maintained with Devon Energy and the oil and gas industry during his time as Oklahoma attorney general. This raises fresh questions about how Pruitt will conduct himself at the EPA, which is charged with regulating that industry.

More than 7,500 pages of emails from the Oklahoma attorney general's office obtained and released by the Center for Media and Democracy through an open records request shed light on Pruitt's relationship with Devon Energy, including allowing the energy giant's top lobbyists to draft and edit letters sent to top federal officials on behalf of Pruitt and other state attorneys general.

A CNN request for comment from the White House was not immediately returned.

An EPA spokesman said the agency would not be commenting.

"That's an Oklahoma issue and we are going to remain focused on the environment and environmental issues," EPA spokesman Doug Ericksen said.

CNN has also reached out for comment to the four state attorney generals who co-signed the August 2013 letter to ask if they were aware the letter had been drafted by Devon Energy officials.

More than 7,500 pages of emails from the Oklahoma attorney general's office obtained and released by the Center for Media and Democracy through an Open Records Act shed light on Pruitt's relationship with Devon Energy, including allowing the energy giant's top lobbyists to draft and edit letters sent on Pruitt and other state attorney generals' behalf to top federal officials.

The newly released emails confirm years of cushy ties between Pruitt and Devon Energy dating back to at least October 2011, when Pruitt also signed a letter quietly drafted by Devon Energy officials and sent it to the head of the EPA. That exchange was first reported by The New York Times in December 2014.

That type of exchange took place multiple times in years to come, according to the released emails.

A month before one of Devon Energy's top lobbyists sent the draft letter on fracking to Pruitt's deputy solicitor general Clayton Eubanks, Eubanks gave Devon Energy officials the opportunity to edit a separate letter addressed to the EPA -- this time about the regulation of methane emissions, a dangerous pollutant.

"Attached is the final draft of the methane letter to EPA regarding the 7 NE States NOI to sue over the regulation of methane emissions. We have received good support on this and I would like to get the letter out in the morning. I thought we should insert a sentence or two regarding the recent EPA report indicating their initial estimates on methane emissions for two categories were too high," Eubanks wrote in a May 2013 email to Bill Whitsitt, Devon's executive vice president of public affairs. "Any suggestions?"

Less than three hours later, Whitsitt replied with proposed additions to the letter from him and his team.

The next day, Pruitt sent the letter that included Whitsitt's changes, word-for-word.

At the time, Devon Energy had been leading the fight against the EPA's system of measuring methane emissions.

"There's no mention of Pruitt questioning anything they (the energy industry) are doing or saying. This is a direct cut and paste type relationship," said Liz Perera, the Sierra Club's climate policy director, who said the emails make clear Pruitt "not only has a good relationship [with the] fossil fuel industry but he's dependent on them to provide research and talking points."

Perera said she was especially struck by the absence of any mention of the earthquakes occurring in Oklahoma at the time, which scientists believed to be tied to fracking activity in the state.

"Pruitt never expressed concern about the increased number of earthquakes believed to be linked to the fracking activity in Oklahoma. He never mentioned launching an investigation into the earthquakes," Perera said.

Whitsitt also sent along talking points and other draft letters to Pruitt's office in 2013 following "conversations with Attorney General Pruitt."

CNN could not immediately confirm whether Pruitt officially used those letters and talking points as well.

The emails also showed that Pruitt was close with other groups beyond Devon Energy.

In a May 2013 email, Pruitt's executive assistant emailed Richard Moskowitz, the general counsel of the American Fuel & Petrochemical Manufacturers association, after "General Pruitt asked that I email you" to put Moskowitz in touch with Eubanks, Oklahoma's deputy solicitor general.

"Thank you again for the information you provided during General Pruitt's visit and please do not hesitate to contact me if there is anything else we can do for you," Pruitt's assistant wrote in the email.

Some conservative groups are defending Pruitt's close relationship with the industry. "Despite hyperventilating from fringe groups on the left, these emails show that Scott Pruitt was a dutiful and responsible Attorney General who fought daily on behalf of the people that elected him," Jeremy Adler of America Rising Squared told CNN. "There was no new information in these emails to support the left's anti-Pruitt fever dreams, instead they showed that he behaved like any accomplished public servant, working with key industries in his state to help his constituents."

CNN's Amanda Watts and Curt Devine contributed to this report.