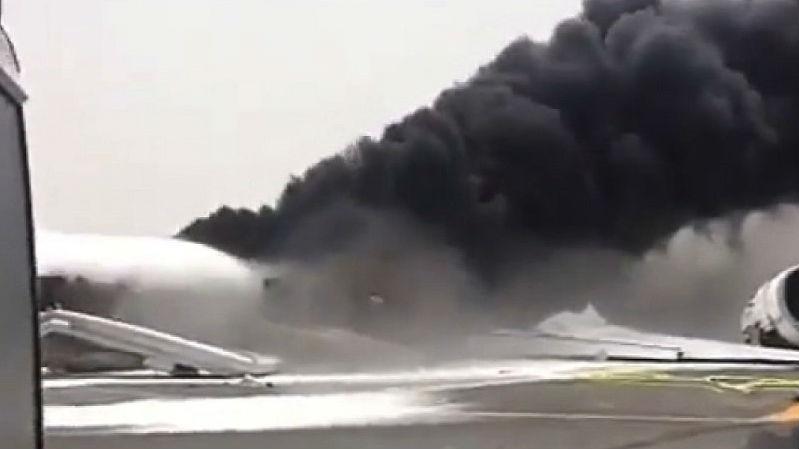 But a firefighter was killed "while saving the lives of others," the Dubai government's media office said.

Flames and thick, black smoke billowing from the stricken Boeing 777 shortly after it came to a stop out on the runway.

There were no fatalities among the 282 passengers and 18 crew members on board, Emirates said.

The majority of those on board were Indian nationals, it added.

The aircraft left Trivandrum International Airport at 10:19 a.m. and was scheduled to land at 12:50 p.m. in Dubai.

Once emergency response teams managed to extinguish the fire, it was clear how deadly this accident could have been: The entire top half of the aircraft's fuselage was missing, with the belly of the plane slumped on the tarmac.

While the cause of the accident is not yet clear, CNN aviation correspondent Richard Quest said images of the airliner could indicate that the front landing gear collapsed and that the plane slid. That could have sparked the fire, he said.

Al Maktoum, the Emirates chairman, said he didn't want to "jump to conclusions" about what happened because the investigation is ongoing.

But he said the fire started after the plane landed, and there were no signs of security problems.

The Emirati pilot and the Australian co-pilot have more than 7,000 flying hours between them, the chairman added.

Emirates, which began operations in 1985, has never had a fatal accident with any of its aircraft.

"Airlines plan for this sort of thing. They have emergency plans in place. The idea is that you have to be able to evacuate an aircraft within 90 seconds if there is an accident on the ground," Quest said. "And this clearly appears to be what has happened."

Boeing, the plane's manufacturer, said it was "thankful all aboard were evacuated safely."

"A Boeing technical team is standing by to launch in support of the U.S. National Transportation Safety Board," a Boeing statement said.

Emirates said it expected an 8-hour network-wide delay in its operations.

All flights departing from Dubai International Airport were delayed for several hours, and all incoming flights were being diverted to other airports, the Dubai government media office tweeted.

According to Quest, Dubai-based Emirates is the largest airline in the world by available seat kilometers (ASK) -- the measure of an airline's passenger carrying capacity -- which multiplies seats available by distance flown.

CNN's Zahraa Alkhalisi in Dubai and Farida Fawzy in Atlanta contributed to this report.